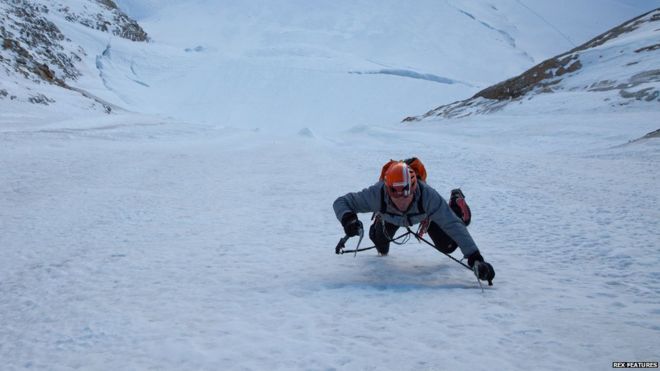 The Swiss Machine – Ueli Steck – has wrapped up his ambitious summer project to climb 82 peaks in the Alps in 80 days. And true to form, he did it quicker than expected, knocking off all of the mountains on his list in just 61 days.

Ueli launched his bid back on June 10 with German mountaineer Michi Wohlleben. The plan was to climb all 82 4000 meter (13,123 ft) peaks in the Alps in 80 days, and to travel between them using only human power. The two men would walk, ski, paraglide, and mountain bike from one mountain to the next before climbing up to the summit. Wohlleben only made it up four of those mountains however, suffering an injury on the descent a few days in. Steck continued on without him, but was joined by several other partners along the way.

One of those partners was Dutch climber Martijn Seuren, who was also attempting to summit all 82 peaks. He slipped an fell to his death back on July 22, bringing an unexpected dose of tragedy to the project.

Known for going fast and light in the mountains, Ueli pressed on once again. And on Tuesday of this week he knocked off the final mountain on his list. That brought his total number of days in the Alps this summer to 61, which is actually one day shy of the record for climbing the 82 peaks. That record was set by Italian climbers Franco Nicolini and Diego Giovannini back in 2008.

What’s next for Steck? Only time will tell. After his very difficult and lift threatening solo-summit of Annapurna a few years back, he has expressed little interest in returning to the Himalaya. But, he seems to be having fun climbing in the Alps, and enjoying the challenges he is finding there. Perhaps we’ll see similar projects out of him in the future. It certainly is fun to follow his adventures.