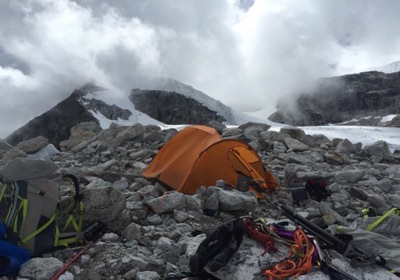 It has been a relatively slow start to the fall climbing season in Nepal, in no small part due to the poor weather that teams have experienced thus far. Last week, heavy rain and snow fell around Everest and Manaslu, making it tough to make any progress at all. In fact, it has been reported that over two feet of snow fell in Everest Base Camp alone, which has had an impact on how things are unfolding there. Still, the Ice Doctors have completed a route through the treacherous Khumbu Icefall, and are now working on finishing the route to Camp 1 as the season begins to unfold at long last.

As you may recall, there is just one expedition to Everest this fall, and it is being led by Japanese climber Nobukazu Kuriki. The squad arrived in BC later than expected, but has since tried to make the best of the situation. Kuriki did an acclimatization climb of nearby Lobuche Peak in preparation for his Everest summit attempt, and is now prepared to begin a solo push to the top. If a weather window opens as expected this week, he’ll climb up to Camp 2 tomorrow and launch his summit bid from there.

Over on Manaslu, the teams are seeing their acclimatization rotations delayed due to the weather as well. The Adventure Consultants report more rain and snow yesterday and today, but hope for clear skies tomorrow to allow them to start back up the mountain. The Summit Climb and Himex teams are facing a similar challenge, as are numerous others. Manaslu is a busy peak this fall, with more than 100 climbers currently hoping to summit.

Over on Makalu, the Alpenglow squad moved up the mountain yesterday as they continue their acclimatization process. They’re hoping to spend a few nights above 25,000 feet (7620 meters) before return to Base Camp. From there, they’ll start watching the weather too with the hopes of pushing to the top. They plan to make a ski descent of that mountain as well.

Explorer Eric Larsen is in Nepal this fall, where he is attempting to climb several unclimbed peaks with partner Ryan Waters. They are reporting similar news on their attempt to summit Jabo Ri. So far, they’ve spent an inordinate amount of time in their tent waiting out storms that include high winds, and plenty of rain and snow as well. Over the past two days, the two men have launched two separate bids to move up the peak, but both were turned back due to dangerous conditions. They are currently back in BC, where they are resting and regaining their strength for another go.

In other news, it appears that the rebound for the economy in Nepal may be a slow one. It was hoped that climbers and trekkers would return in large numbers to help jumpstart the rebuilding process following the deadly earthquake that had occurred back in April. But so far only about 200 permits have been issued to climbers, which is a far cry from the 1000 that were issued last year. Hopefully more travelers are preparing to visit the country later in the fall as the trekking season really gets underway, but at the moment it looks like it could be an even longer road to recovery than first anticipated.

That’s all for now. More news from the big mountains soon.