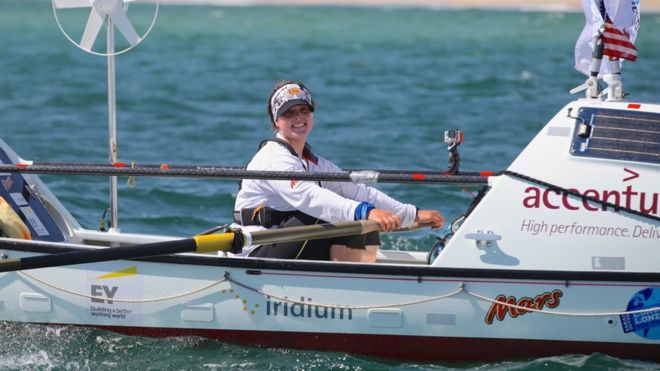 If you’ve been following Sarah Outen’s London2London via the World expedition over the past few years, you know she’s faced some tough challenges in her attempt to circumnavigate the globe completely under her own power. This weekend she may have reached her biggest hurdle yet however, as the 30-year old adventurer saw the final stage of that journey hit with a major setback. One that threatens to put an end to the entire project.

Sarah was 143 days into her Atlantic ocean crossing in a rowboat this weekend when she was forced to call for help by a passing boat. The seas had become incredibly turbulent and winds as high as 60 knots (69 mph/111 km/h) were being recorded as hurricane Joaquin took aim at her position. The storm, which is raging in the North Atlantic now, put Sarah in jeopardy, forcing her to call for assistance even as she was closing in on London, the starting point for this epic round-the-world adventure that began more than four years ago.

On Saturday, Sarah was safely retrieved by a passing ship called the Federal Oshima. That vessel is currently bound for Montreal, Canada and is scheduled to arrive there later in the week. Unfortunately, Sarah’s rowboat – Happy Socks – was damaged in the rescue and had to be left behind on the Atlantic Ocean. That leaves her now heading in the wrong direction, and without a boat to complete the journey home.

The expedition first started back in the spring of 2011. Sarah paddled under the London Bridge on the Thames River, than set out across the English Channel to France. From there, she rode her bike across Europe and Asia, eventually returning to her kayak long enough to reach Japan, where she intended to row across the Northern Pacific Ocean. Her first attempt to complete that stage met with a similar setback when a major storm hit the region, forcing the British woman to call for a rescue, and abandoning another rowboat. She was able to recover from that challenge, and returned a year later to finish the crossing of the Pacific, reaching the Aleutian Islands in Alaska in 2014. Sarah than paddled the Aleutians to the mainland, returned to her bike, and rode across the U.S. and Canada, arriving in New York City this past March. After waiting for spring to arrive, she set out on the last leg of the journey – the crossing of the Atlantic.

It’s hard to say where this puts Sarah’s circumnavigation attempt now. As you can imagine, she is heartbroken over having to call for assistance, and leaving her boat behind. Whether or not she’ll be able to raise the funds to buy another boat remains to be seen, but I have no doubt that she’ll still want to see this undertaking through to the end.

We should know more once she reaches Canada in a few days. It’ll probably take some time to sort out the logistics, but I suspect she’ll find another way to overcome this obstacle in time as well.