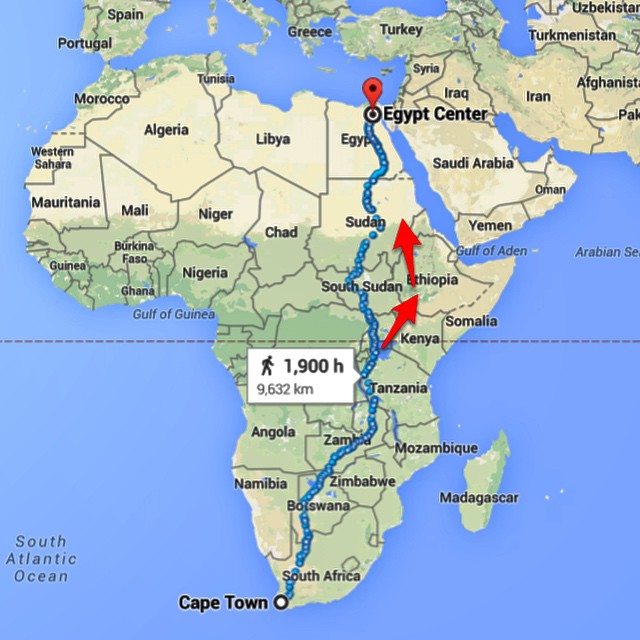 A Canadian fitness expert and adventurer is preparing to embark on what promises to be the journey of a lifetime. Mario Rigby is in the final stages of planning an epic trek across the entire African continent, heading south to north. His journey will begin in Cape Town, South Africa, with the hopes of eventually reaching Cairo, Egypt by traveling only on foot, by sail, or paddle.

Rigby had dubbed his expedition Crossing Africa, and he plans to get underway on November 24. His planned route will take him out of South Africa into Botswana, Zambia, Tanzania, Kenya. From there, he may choose to continue into Uganda and proceed into South Sudan, or detour across Ethiopia instead depending on the political situation in that region as he approaches. Finally, he’ll trek across Sudan and into Egypt as he eventually pushes towards the finish line.

As he walks across Africa, Mario says that he expects to cover approximately 10,000 km (6213 miles) along the way, and has projected that it will take him about 15 months to complete the entire journey. He plans to live on just a few dollars a day, and will be camping in the wild much of the time, but hopes to stay with locals while passing through towns and villages.

Rigby says he has numerous reasons for undertaking this tremendous journey. First and foremost, he wants to test the boundaries of human endurance, both physically and mentally. He also hopes to study the importance of health and fitness in difficult environments, while also investigating the how African tribes have adapted to those same environments. He also hopes to use this trip to inspire others to do adventurous things, and he wants to bring more awareness to the importance of conserving the environment. All ambitious goals to say the least, but certainly obtainable given the scope of his expedition.

Currently, Mario is on a training walk from Toronto to Montreal, which is serving as a warm-up for things to come. But soon, he’ll depart for South Africa where he will begin the walk in just a few short weeks. You can follow his progress on Facebook, Twitter, and Instagram to get updates on how he is doing. The video below also serves as a good introduction.

Thanks to my friend Julian Monroe Fisher for sharing Mario’s story with me.