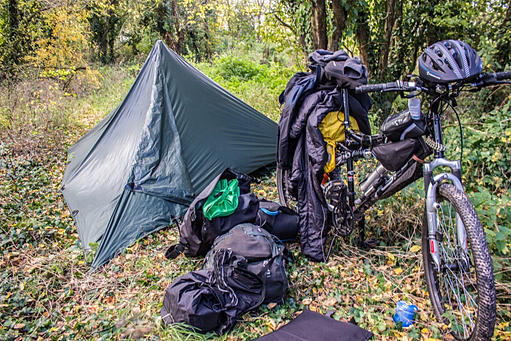 If you’re in need of a bit of inspiration to start your week, look no further than Tommy Scargill, a British adventurer who has just set out on a very personal, but also very intriguing, journey.

This past weekend Tommy started what will be a year-long journey by bike across Europe and Asia in which he intends to camp and live in the wild as often as possible. In fact, the idea is to travel as independently and cheaply as he can, with the hopes of living off just £3 ($4.60) per day. Along the way, he’ll stop in various places to work and become immersed in the culture, while sharing his experiences and adventures on his website, TheHopefulVagabond.com.
Tommy freely admits that he is not much of a cyclists, and doesn’t know a whole lot about surviving in the outdoors either. This alone should make it fun to follow his progress, as he learns to overcome the challenges he’ll face out on the road. For instance, he is currently riding through France, and just a couple of days into the journey is already discovering how difficult it can be to find water sometimes. Considering the fact that he is setting out in the fall, with winter already looming, means that he’ll have some interesting experiences to say the least.
But Scargill isn’t undertaking this journey solely for the adventure. He is also using it as a means to raise funds for the Royal Marsden Cancer Charity, an organization that is using cutting edge medical techniques to combat cancer, a disease that has had a dramatic impact on Tommy’s life. The young man, who is just 22 now, battled Acute Lymphoblastic Leukemia on two separate occasions as a teenager. He has now been in remission for five years, and has vowed to live life to the fullest as result of getting a second chance.
Tommy set off from the U.K. on Saturday and as mentioned, has already crossed the channel into France. From there, his route will take him across Belgium, Germany, the Czech Republic, Slovakia, Poland, Belarus, Lithuania, Latvia, Estonia, and into Russia, before continuing on into Kazakistan, and China, before eventually wrapping up in Hong Kong next year. He’ll ride a bike that he picked up for next to nothing, and will carry about 15 kg (33 pounds) of gear with him, including clothing, sleeping bag, a light tent, stove, and a variety of tools to keep his bike functioning. He’ll also carry some camera gear, a laptop, and a variety of other gadgets which he’ll use to document the trip.
As I mentioned, the 12-month long journey has just gotten underway, so if you start now, you’ll be able to follow Tommy’s trip in its entirety. It certainly should be an interesting one to watch unfold. I wish him the best of luck in this adventure.