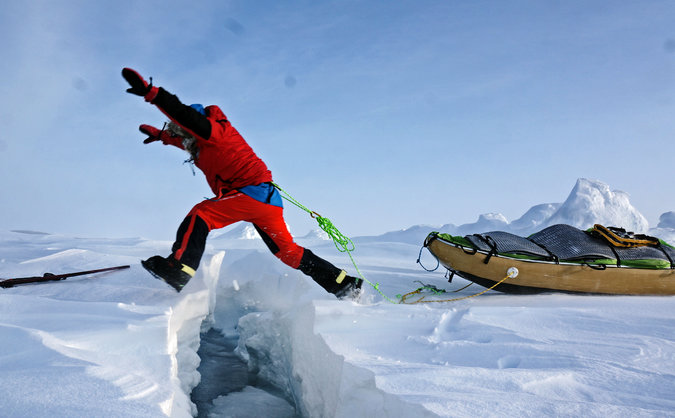 On Wednesday of this week Animal Planet will air an amazing documentary that will certainly be of interest to regular readers of The Adventure Blog. The show, which is entitled Melting: Last Race to the Pole, follows Eric Larsen and Ryan Waters on their incredibly difficult expedition to the North Pole, which we followed very closely back in 2014. The duo spent weeks out on the frozen pack ice as they struggled to travel nearly 500 miles from Cape Discovery, Canada to 90ºN, the Geographic North Pole.

The documentary is both an ode to their amazing effort in the Arctic, as well as a discussion point for climate change. As our planet has warmed, the trek to the North Pole has become increasingly more difficult to complete. So much so, that there are many who feel that Eric and Ryan’s journey could be the last successful full-distance North Pole expedition to be completed by man – something that I tend to believe as well.

The two-hour film shows the struggles that the two men faced as they lugged 320-pound (145 kg) sleds filled with gear and supplies for their unassisted, unsupported trek to the Pole. The terrain was incredibly difficult, the weather was wild and unpredictable, and the conditions were constantly dangerous. And to add to the challenge, the two explorers were also racing the clock as they hoped to set a new record on their way to the top of the world. If you have been reading this blog for a few years, you probably already know if they made it or not. But if you’ll be watching the television show completely unaware of the story, I won’t spoil it for you.

You can also get a sneak peek of the show in the video below, which gives you just a hint of what it was like to be out on the ice for days on end. This will certainly be an interesting documentary to watch unfold, and I hope everyone gets the chance to see it.