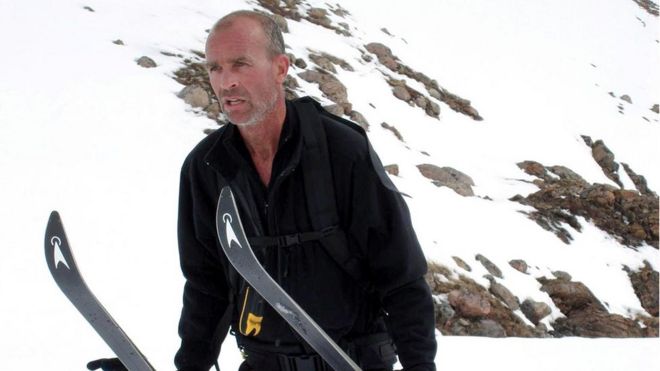 There is very sad news to report from Punta Arenas, Chile today. British polar explorer Henry Worsley has passed away from exhaustion and other ailments as a result of his attempt to complete a solo and unsupported crossing of Antarctica. He was 55 years old.

Worsley set out on his journey back in early November with the goal of becoming to the first to traverse the frozen continent alone and without assistance. He was out on the ice for more than 71 days, and had covered over 900 miles (1448 km) completely on his own. He was just 30 miles (48 km) shy of reaching his goal when he called for evacuation last Friday, January 22. At that point he was exhausted beyond measure, and couldn’t find the strength to push on any longer. A flight was dispatched to retrieve him, and he was flown back to the Union Glacier camp before continuing on to Punta Arenas.
Once he arrived back in Chile, Worsley was taken to a hospital where he was diagnosed with peritonitis, which is an inflammation of the peritoneum, a thin later of tissue that lines the inside of the abdomen. The condition is generally caused by a bacterial infection in another part of the body.
Henry’s wife Joanna flew from the U.K. to join him, and doctors performed surgery in an attempt to save his life, but the condition was too advanced and his exhausted body had no strength to fight off the attack. Joanna released a statement saying she was “heartbroken with sadness” and that her husband had passes away due to “complete organ failure.”
We’ve been following Henry’s progress in the Antarctic here at The Adventure Blog since before he even set out on his journey. It was a difficult endeavor to say the least, but when he reached the South Pole back on January 4th he seemed strong and in good spirits. In recent days it became evident that he was struggling however, as the long journey truly took its toll. He skied in near whiteout conditions his last few days on the ice, and photos of him in his tent showed a man who was gaunt and weary beyond measure.
I never met Henry in person, but I followed his expeditions closely and cheered him on in his adventures. With this Antarctic crossing I read his expedition updates nearly every day, and wrote numerous times about his progress. When I read the news that he had passed away I felt incredibly sad. He was strong, adventurous spirit who challenged himself to amazing things, and he will continue to serve as an inspiration to many of us.
Worsley’s story will also serve as a reminder. Despite what we might think, we haven’ quite conquered the planet just yet. There are still some tasks that remain incredibly difficult, and Mother Nature is the most formidable opponent of all.
I want to express my sincerest condolences to Henry’s wife Joanna, and all of his friends and family. We lost a great man today, and he will be missed.