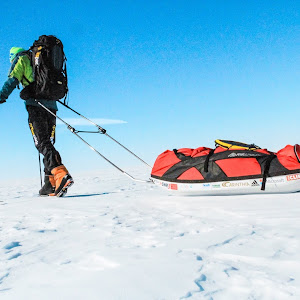 Last January the world of outdoor adventure and exploration was shocked to learn that a little-known German Antarctic skier had set a new record for covering the distance from Hercules Inlet to the South Pole. The old record had been set back in 2011 by a Norwegian explorer by the name of Christian Eide. He managed to cover the 1175 km (730 mile) route in a blazingly fast 24 days, 1 hour, and 13 minutes. But a man by the name of Martin Szwed seemingly came out of nowhere to claim that he had shattered that record by nearly 10 days, skiing to the South Pole in just 14 days, 18 hours, and 43 minutes. It was heralded as a triumph at the time, with Szwed’s sponsors and social media trumpeting his accomplishment.

But then, something funny happened on the way to the South Pole. It all started to fall apart as holes appeared in Szwed’s stories of where he was at certain times, and how he managed to get there. His photographic evidence of reaching 90ºS appeared to be photoshopped, and his claims of previously summiting Mt. Vinson were also proven false. Just as quickly as he had shot to the top, Szwed came tumbling back down.

Now, Outside magazine is taking a look at the controversial story, with none other than Eric Larsen writing a piece about the whole affair. Larsen probes into Szwed’s claims using flight manifestos from Antarctic Logistics and Expeditions, the company that supports most expeditions to the frozen continent, to further discredit his story. Eric, who is an accomplished polar explorer himself, even talks to other members of the close-knit community to get their take on the situation, with most saying they knew it was a false story from the beginning.

The article is an extensive one, with lots of details on how the situation unfolded, the reaction from the media, and Szwed’s own denials. Within a few days the disgraced explorer’s sponsors started to backtrack, and in-depth examinations of his claims started to punch holes in the story. There was even a public exchange between Szwed and Eide.

When writing the piece for Outside, Larsen when directly to the source, contacting Szwed himself. The German says that he has GPS tracking information that will serve as proof of his claims, but if he releases it he could face jail time and a substantial fine in his home country. The one-time mountain guide is under investigation for claims of fraud and possibly visiting Antarctica without proper authorization.

The whole story is a sordid one, but well worth a read. For my part, I wrote about the controversy last year and at the time thought that the story was suspicious from the start. For one thing, as someone who follows the Antarctic ski season closely, Szwed hadn’t even shown up on my radar in the reports I was writing. That isn’t necessarily proof that his claims are false of course, but it is a bit unusual to not know about a speed-record attempt of this kind.

The sad thing is, that Szwed’s story isn’t the only one like this. There have been others who have also falsified reports and records. This probably won’t be the last time it happens either.