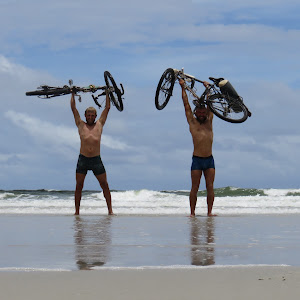 Way back in October I told you about a pair of Polish adventurers who were just setting out on an attempt to cycle the length of the Amazon River in South America. At the time, they had just gotten underway on what they expected to be a 6-8 month long expedition that would cover more than 7000 km (4345 miles) on specially designed bikes that were built to float on water. Last Friday, Dawid Andres and Hubert Kisiński completed that journey at long last, reaching the Atlantic Ocean after six months of pedaling.

The original idea behind the expedition was for the two men – who are brothers – to kayak the entire Amazon. But when they started planning the logistics behind such a journey, they discovered it would be more expensive than they had originally thought. Searching for alternative forms of transportation to help bring costs down, they hit on the idea of using bikes instead. The unique floating bike concept sprung more from necessity than anything else.

When they first began their ride back in September, they were on solid ground, pedaling their bikes alongside the small tributary that would eventually grow into the might Amazon. In those early days, they rode through the Andes until eventually reaching a point where they couldn’t ride alongside the river any longer. From there, they connected the frames of their bikes to the special pontoons that kept them afloat out on the water. In the weeks that followed they were able to cover hundreds of miles at a surprisingly quick pace.

Late last week, the brothers reached the Brazilian city of Belem on the Amazon, which was the last outpost before pushing on to the Atlantic. Eager to wrap up the journey, they got back on their bikes one final time, and spent the last 22 hours of the expedition out on the water. When they reached the ocean, they plunged into officially bringing an end to their adventure.

Congratulations to David and Hubert on finishing up this amazing journey. To find out more, visit the expedition’s official website.