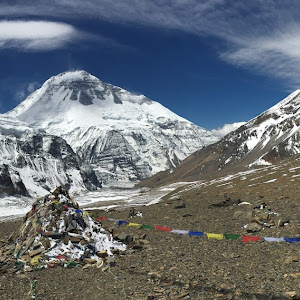 It is safe to say that the spring climbing season in the Himalaya is now in full swing, with teams now focused on acclimatization and preparation for eventual summit bids. For the most part, it has been a relatively quiet season so far, which is a welcome change from the past few years when we’ve seen everything from brawls on Everest to tragic deaths to serious disagreements between climbers. But so far this year, there has been a sense of calm pervading the entire region, which could lead to a very successful return to form.

We’ll start today’s update with news from Annapurna, where several teams are now on the move with the hope of topping out over the next few days. The plan is to reach Camp 4 tomorrow, spend a brief time resting there, and then launching the final push to the top. At the moment, the weather looks like it will be good, with winds dying off as they climb higher. If everything goes according to plan, they should complete the ascent on Sunday, May 1, most likely ending the season on Annapurna for the year.
Over on Everest, a ladder was expected to be installed along the route up the Lhotse Face that was closed yesterday due to an ice collapse. That ladder will help the teams overcome this new obstacle in a safe fashion and allow them to continue on to Camp 3 as part of their acclimatization efforts. We’re also told that the Sherpa team that is fixing ropes up the mountain is progressing nicely, and should finish their work all the way to the summit in the first week of May. After that, it’ll just be a matter of when the teams are properly prepared for the altitude and a weather window opens to the summit. Most likely that will occur around the middle of May.
On the Northside of Everest things are progressing as well, although at a bit slower pace. The Chinese-Tibetan team has started installing the ropes there and have now reached 7000 meters (22,965 ft), and by all accounts Base Camp is quiet, well maintained, and orderly. Teams are acclimatizing there as well, with the process continuing on schedule.
Meanwhile, progress is being made on other mountains in the Himalaya as well. ExWeb is reporting that Sherpas have now established C1 on Dhaulagiri and are pressing forward with installing the ropes up to C2 as well. On Shishapangma, Ueli Steck and David Göttler are waiting out some high winds before proceeding upwards, but everything looks good at there at the moment. On Cho Oyu, teams are still arriving and getting settled, but one group has already reached Camp 2 at 7000 meters (22,965 ft), while on Makalu, the route up Makalu La has been installed up to C2 as well.
Things aren’t going quite as smoothly on Manaslu, where heavy snows are keeping teams grounded for now. Above Camp 1 – located at 5800 meters (19,028 ft) – the snow is said to be more than a meter and a half deep, and still falling. That has kept all climbers from going much higher than C1, which has hampered their efforts to acclimatize. As you can imagine, all of the teams are watching the forecasts closely, and working out plans to break trail to C2 and higher.
We’re in the part of the climbing season that is a bit of a grind for the teams. They still have lots of work to do before any eventual summit pushes, and there are lots of challenges to overcome before that happens. Still, things are going according to the plan for the most part, with progress being made across the region. In a few weeks time, we’ll be reporting on serious summit pushes during a season that needs to come off safely and without controversy.