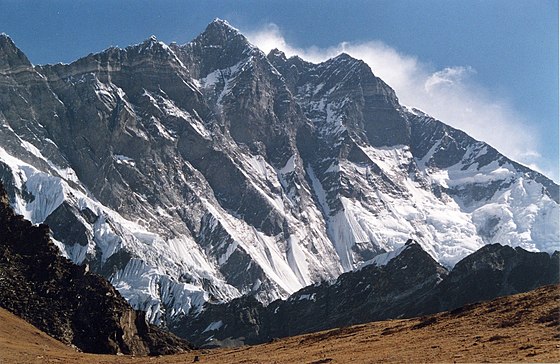 More news from the Himalaya today where the spring climbing season continues to unfold at a quick pace. But today we learn that acclimatization efforts are at a standstill on Everest, while teams on Annapurna are once again on the move.

The big news of the day is that the Lhotse Face on Everest is closed due to the collapse of an ice ledge on the mountain. The collapse occurred along the route from Camp 2 to Camp 3, where some teams were already moving up as part of their latest round of acclimatization rotations. All teams have reportedly retreated to C2, where everyone seems to be safe. Thankfully, there doesn’t appear to be any casualties.

The collapse occurred this morning local time in Nepal. The teams there are now examining their options for climbing higher, which could involve using ladders to climb over the chunks of ice or a longer route that goes around the area where the collapse occurred. It will probably take a couple of days to sort things out, as ladders would need to be carried up the mountain to be put into place or any potential detours will need to be scouted before teams attempt to go around.

In other Everest news, it has also been reported that a Sherpa collapsed in Camp 1 today. He was immediately treated for altitude sickness, placed on oxygen, and evacuated to Lukla. Now that he is at lower altitude, he is expected to recover completely.

Elsewhere, over on Annapurna a new summit bid is now under way. Teams have started to move up this morning with the hope of topping out on Sunday, May 1. About 30 climbers, including 10 Sherpas, have begun to move up, with Aussie Chris Jensen Burke and Spaniard Carlos Soria amongst the group. If all goes according to plan, they should reach C4 by Saturday and launch their bid that evening with the plan of summiting on Sunday morning. Hopefully the weather will hold, allowing them to safely get up and down.

That’s all for now. More news as it comes in.