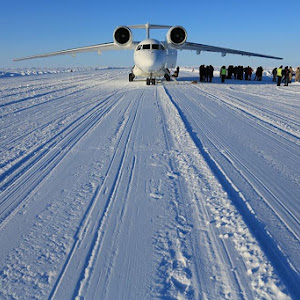 It has been a challenging season in the Arctic so far with lots of delays for the explorers, researchers, and adventurers who planned to travel their this year. The Barneo Ice Camp, a temporary base built at roughly 89ºN each spring has experienced its share of issues, which resulted in some unprecedented delays to the start of the season. But now, things are finally back on track and regular flights have resumed, as support teams race to complete a busy schedule as quickly as possible.

ExWeb is reporting that the runway at Barneo is complete and stable at long last, which is allowing the Russian built Antonov AN-74 aircraft to safely land and deliver important supplies and people to the Arctic. You may recall that the team of engineers who build the Barneo camp experienced issues with the blue ice landing strip, which cracked on four separate occasions, even forcing it to be relocated twice.

Amongst the groups that have now flown to Barneo so far are guided last degree ski teams that will spend the next ten days or so traveling across the frozen Arctic Ocean on their way to 90ºN. Several research teams are also out on the ice, as were Arctic marathon runners who were able to complete their race after several delays.

Because of the long delays to the start of the season, it looks like Barneo could stay open later than normal. Typically it begins to wind down operations by late April, but it is now looking like it could stay open into early May due to the backlog of people waiting to reach the ice.

Meanwhile, the Race Against Time team reports that ice conditions are now improving dramatically. They have moved away from open water and are now skiing over solid ice, which is allowing them to make better time, covering 10 nautical miles yesterday. But the continue to see foot prints from polar bears and even arctic foxes, reminding them that they are not alone out on the ice. The team is on its way to the North Pole and should arrive there late this week or early next.