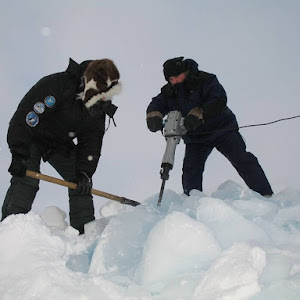 It has been a challenging start to the Arctic exploration season this year to say the least. As we’ve reported several times, the runway at the Barneo Ice Camp has been problematic, forcing the relocation of the temporary base and delaying the arrival of researchers, explorers, and adventurers. Things continue to look dicey at Barneo, where problems persist, but one of the more high profile teams is now set to travel to the Arctic at long last.

The Race Against Time team, which consists of Mark Wood, Paul Vicary, and Mark Langridge, have confirmed that they are now preparing to leave for Barneo, where they will immediately hop onto a helicopter and fly out to the frozen Arctic Ocean to start their expedition. They will have approximately 20 days to ski as far as they can towards the Canadian coastline, at which point they will have to be retrieved from the ice, which could be a difficult proposition on its own.

This is a very truncated version of their original plans, which saw them skiing for hundreds of miles across the Arctic Ocean to reach remote Ward Hunt Island. Their plan is to document the impact of climate change on the region, while perhaps undertaking the final full-length ski journey from the North Pole. But now, they’ll try to ski as far as possible while staying true to their initial expedition goals.

Meanwhile, ExWeb reports that the new runway at the relocated Barneo camp continues to crack under the movement of the ice. This second base is not proving to be much more reliable than the original, but a new location for the landing strip has been found and construction has already begun. Emergency supplies have also been shipped to the Ice Camp to help keep the team up and running while they wait for the regular supply planes to begin arriving. There is also word that the season could be extended into May in order to accommodate all of the teams that are hoping to get some time in the Arctic or at the North Pole this season. Right now, all of those men and women are stacked up, waiting for flights to resume. Already days behind schedule, they are of course starting to get anxious.

Hopefully the flights to Barneo will start to get back on schedule soon. I’ll continue to share updates on the North Pole season as it begins to unfold.