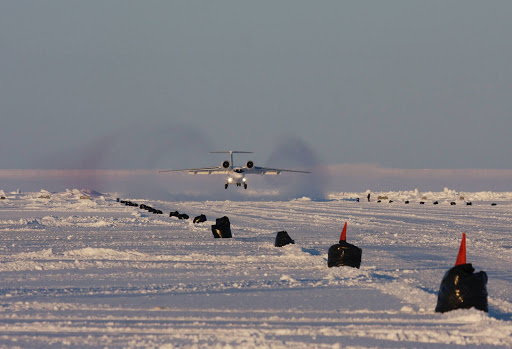 After a number of false starts and delays, the North Pole season is underway at long last. But while the first team has now hit the ice, challenges remain at the Barneo Ice Camp, where regular flights are just now starting after bureaucratic issues caused even more issues.

First, an update on the Race Against Time team, which was finally dropped off on the ice yesterday, although they have once against changed direction due to their shortened window for skiing across the Arctic. Originally the plan was for British explorers Mark Wood, Paul Vicary, and Mark Langridge to ski from the Russian side of the Arctic Ocean to the North Pole. When that route started look tenuous, they elected to change their plans and fly to the North Pole to ski south to Ward Hunt Island in Canada instead.

Now, thanks to all of the delays in flights and at the Barneo camp, the team has roughly two weeks to conduct their expedition. This has caused them to switch their plans once again, now skiing the final two degrees to the North Pole instead. The trio were dropped at 88ºN yesterday, and will now spend the next 12-15 days skiing to the top of the world. Along the way they’ll conduct research on the impact of climate change on the Arctic while documenting current conditions there.

Meanwhile, the team of engineers at Barneo have now completed their fourth runway made of blue ice. The previous landing strips suffered cracks due to the movement of the ice, making them unsafe for incoming flights. The team was in desperate need of resupply, and immediately called for a large aircraft to bring them food and fuel.

But after that flight, the first aircraft carrying skiers, explorers, researchers, and other people was scheduled to take off in an attempt to get things back on schedule in the Arctic. Unfortunately, the Norwegian government scrubbed that flight and required the Barneo team to fill out permits for all 11 flights that they had already scheduled. This paperwork has caused further delays, but the first five flights are now on the docket with the others to follow.

It seems highly likely that Barneo will stay in operation for longer than usual. Typically it begins to wrap up operations in late April, but with these long delays it seems the Arctic season will probably stretch into May. How this will impact travel there remains to be seen, but with the spring melt already underway, it seems likely that this will continue to be a very unusual year indeed.