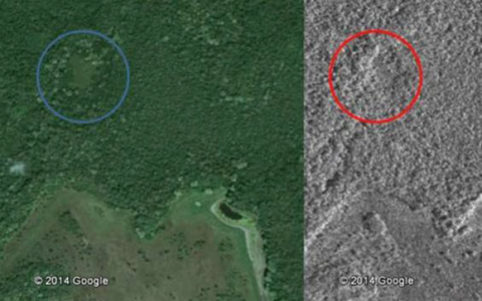 We have an update today on that fascinating story that I posted yesterday about a 15-year old Canadian boy who claimed to have discovered a lost Mayan city in the Yucatan Peninsula. It seems that experts are poking holes in the young man’s theories, saying that he didn’t find a missing city at all, but instead spotted an overgrown agricultural field instead.

The original story was that school boy William Gadoury noticed that Mayan cities were located on a map in the same shape as several constellations in the sky. Looking at old star maps, the then overlaid the constellations on terrestrial maps and noticed that there were locations where cities should have lined up with the stars, but there were no known settlements there. So, William broke out Google Earth and started pouring over the images in search of manmade structures, discovering what looked like the remnants of a prior civilization.

Naturally, the story has struck a chord with the public, many of whom have been fascinated by this narrative, while also wondering why no one else had noticed this placement of Mayan cities in the past. Well, it turns out that there may be some basic issues with the teenager’s general premise, as National Geographic explains, and the structures that he spotted in the satellite images may not be as old as he suspects or possibly not even man-made at all.

Archaeologist Ivan Šprajc says that the square shape spotted on the map is really an abandoned field that probably isn’t any more than 20 or 30 years old. He also says that other potential structures are most likely natural shapes, and include a clearing in the jungle, which probably doesn’t have anything to do with a lost Mayan city.

As I mentioned in my original story yesterday, the only real way to confirm the existence of a lost city is to send a team of archaeologists out to examine the site. Considering the skepticism that is being raised from others in the field, it seems unlikely that that will happen soon. Of course, there are some who believe that trained archaeologists have also been caught with egg on their face by being upstaged by a teenager, so they have reason to cast doubt on his findings. Only time will tell at this point.