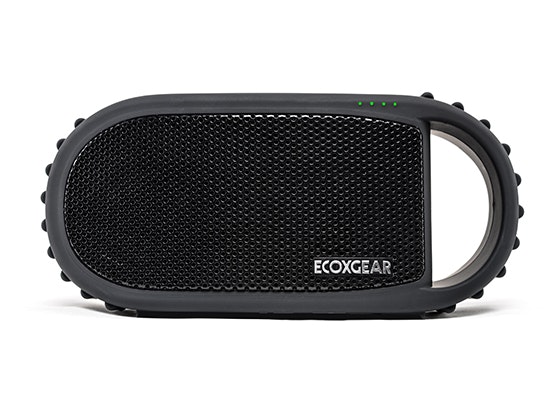 The ruggedized Bluetooth speaker market continues to become an increasingly crowded one. A few years ago there were only a few options available for shoppers, but today there are literally dozens of speakers to choose from. Deciding which one is right for you can be tough, as manufacturers continue to add new features in an attempt to stand out from the crowd. One of the best options that I’ve had the chance to use personally is the new EcoCarbon from ECOXGEAR, which allows you to not only take your favorite tunes with you just about anywhere, but it packs in some nice extras that you’re sure to appreciate as well.

As with similar speakers, the EcoCarbon can be paired with a smartphone or tablet to wirelessly stream audio via a Bluetooth connection. That process is simple and easy, and within a matter of seconds you’ll be listening to music, audiobooks, podcasts, or just about any other audio source you can think of.
Sound quality is excellent, with nice performance across the entire spectrum, including bass. Sometimes these portable speakers are lacking in that department, but the EcoCarbon delivers nicely. On top of that, it is capable of pumping out the jams at a high volume, which can often come in handy when using it in an outdoor environment.
In terms of rugged construction, the EcoCarbon is rated as an IP68 in terms of water and dust proof rating. That means that it can be immersed in up to a meter of water without fear of the speaker breaking, and it is completely impervious to dust, dirt, and sand. That means we can take it with us on a camping trip, kayak excursion, or just for use in around the house or in the backyard, without fear of it not surviving. In fact, the speaker even floats when dropped in the water, making it easier to retrieve should that occur.
ECOXGEAR has a history of making good Bluetooth speakers, and over time they’ve continued to refine the over quality of their products. At this point, their speakers are amongst the best out there, which is why they have continued to up their game by adding new features as well. For instance, the EcoCarbon comes equipped with a built-in LED light that can be used as a flashlight in a pinch. This comes in handy when stumbling around the campsite at night. The speaker also comes with a standard USB port that allows you to charge your mobile devices while on the go. That is a handy feature to have for sure, particularly if you’re going to be away from an power outlet for an extended period of time.
One of the ways that newer Bluetooth speakers continue to improve is in the area of battery life. The EcoCarbon can play music for up to 12 hours at a time, depending on volume and the use of the flashlight or charging options. That’s a pretty solid number for a speaker that isn’t overly large and can produce such great sound quality and levels of volume. Generally that should be enough to get you through a weekend excursion, but that depends on how much you use it too. And since it can be recharged using a micro USB cable, the speaker can be attached to a solar panel or other battery pack when in the wild as well.
At 1.9 pounds (.86 kg)  and a little over 9 inches (22 cm) in length, this isn’t a massive speaker by any means. That said however, its weight makes it a luxury item for anyone traveling into the backcountry. Some of us won’t think twice about dropping it into a backpack for such an excursion, but for others that will be seen a lot of ounces that could be used for other things. If you’re someone who likes to go ultralight on the trail, this won’t be the speaker for you. But then again, you’re probably not taking a speaker with you at all anyway.
The other great thing about the continued advancement and competition in the Bluetooth speaker market is that it is helping to bring prices down dramatically. The EcoCarbon costs $129.99, which is a very good price for all of the features and functionality you get from this speaker. If you’re in the market for a good outdoor audio source for the summer ahead, this is definitely one to have on your radar.