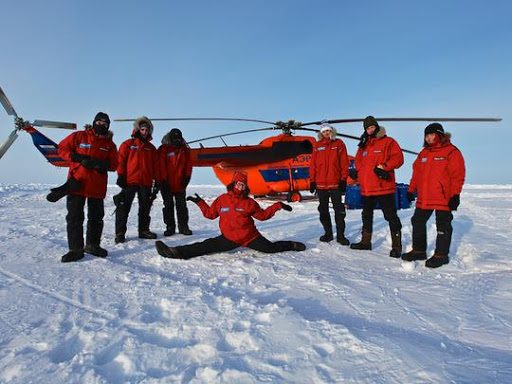 The 2016 Arctic Season may be over, but there are still a few interesting stories to share. For instance, ExWeb has posted an article about a team of Russian teens who skied to the North Pole (last degree) in just 5 days following a host of delays that cut into their planned time out on the ice.

The group of seven teens had planned to make a last-degree ski expedition to the North Pole via the Barneo Ice Camp. Their original schedule gave them 7-10 days to complete the journey, which covered roughly 125 km (77.6 miles) over the frozen Arctic Ocean. That means they were able to sustain a pace of about 25 km (15.5 miles) per day, which is an excellent pace considering the conditions they encountered on the ice.

The challenges of the Barneo Ice Camp have been well documented on this blog, and elsewhere, this year. The ice flows that the temporary base is built on were being buffeted by ocean currents throughout the season, causing the blue ice runway there to crack multiple times. That caused a lot of delays, causing the Russian teens, and a number of other teams, to back up while they waited for their chance to fly out to the camp. Eventually the runway was completed, and the flights started arriving, but it took awhile to catch up on the backlog of people who were waiting to arrive in the Arctic. This cut into the time that the skiers had to reach the Pole.

According to ExWeb, when the team was retrieved from their finish line at 90ºN, they did not look tired or exhausted. In fact, they still had a lot of energy and were so excited to have reached the North Pole. It was quite a journey for these young adventurers, many of whom have wanted to ski through the Arctic for the better part of their lives.

I know that this is “only” a last degree ski expedition, but it is still an impressive feat to see these teenagers make that journey in such a quick pace. Five days to cover a degree of latitude is quite a short time frame, and I know a few polar explorers who would be hard pressed to maintain that same pace themselves. Also, how cool is it to be a teenager and get to go to the North Pole. I clearly went to the wrong high school.