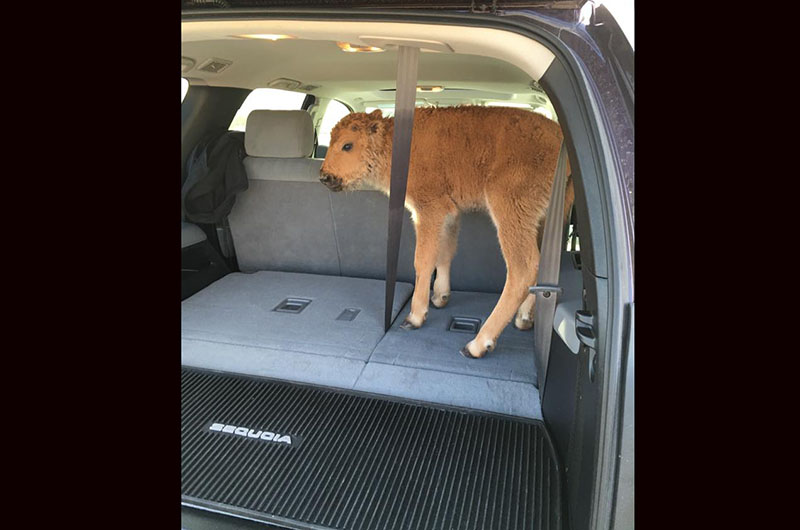 One of the top stories on social media over the past few days has been the news that a father and son duo traveling through Yellowstone National Park put a bison calf into their car because they worried that it was too cold and might die. They took the calf to a ranger station at Lamar Buffalo Ranch, where the animal was taken back into custody and returned to its herd. Unfortunately, the news came yesterday that the young bison had to be euthanized, as the herd wouldn’t accept it back into the group.

It should be noted that the man and his son who took the calf were foreign visitors, and it was their first time in Yellowstone. But they ignored Park Service warnings to stay away from the animals, and they obviously had little knowledge of how the creatures in the park survive in much harsher conditions than what are currently found in the park. They were cited for transporting the animal, and park rangers are once again reminding visitors to leave the animals alone. Usually that warning is to keep the humans safe more than the animals, as in recent years there have been some high profile wildlife encounters that have turned tragic. Most of those incidences have occurred between humans and bisons.

Apparently, the calf had been returned to its herd, but the other animals wouldn’t accept it back. But having been exposed to humans, the calf was then approaching other visitors to the park and wandering up to cars. That is once again a very dangerous situation for everyone involved, so rangers made the tough decision to put the calf down.

If you’re reading this blog, you probably don’t need the reminder, but when you’re in the wild, leave the animals alone people. That is advice that might just save your life. This story is also a good reminder that not everyone has the same experience and knowledge that most of us take for granted. It’s just incredibly sad that this newborn bison had to suffer for that.