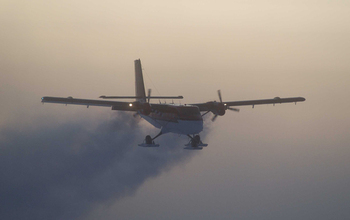 The National Science Foundation has initiated an evacuation procedure from the Amundsen-Scott South Pole Research Station as one of the winter staff members there has taken ill. The nature of the medical emergency hasn’t been divulged, but it is clear that it is serious enough for the NSF to call in help.

Canada’s Kenn Borek Air has scrambled two Twin-Otter Aircraft, which are currently en route to South America before making the leap over to the Antarctic Continent. One of those planes will serve as a support aircraft should search and rescue operations become necessary, while the other will make a 1500 mile (2414 km) flight from the British Rothera Research Station to the South Pole.

The time table for this rescue operation will be heavily dependent on current weather conditions in the Antarctic, but it is believed that June 19 will be the earliest that plane can reach the South Pole. It is currently winter in the Southern Hemisphere, which makes for some incredibly inhospitable weather in Antarctica. Conditions can change very quickly, and it is not uncommon to have high winds and incredibly cold temperatures, sometimes falling to more than -100ºF/-73ºC. That could complicated an evacuation procedures over the next few days.

Because it is winter at the South Pole, the Amundsen-Scott station has a greatly reduced staff on hand to maintain the base. Typically those crew members are on duty there until November or so, when the regular crew returns to ramp up seasonal research operations. The winter staff usually knows that once they are in place there is usually no way for them to return home, so the nature of this medical evacuation must be fairly serious. Not only is the NSF risking the lives of the pilots performing the dangerous flight, but they’re also risking the safety of their crew.

Hopefully everything will go off without a hitch in the next couple of days, and both the flight crew and the NSF staff member will be safely evacuated. It should be an interesting story to follow to say the least.

2 thoughts on “Evacuation Operation Underway in the Antarctic”