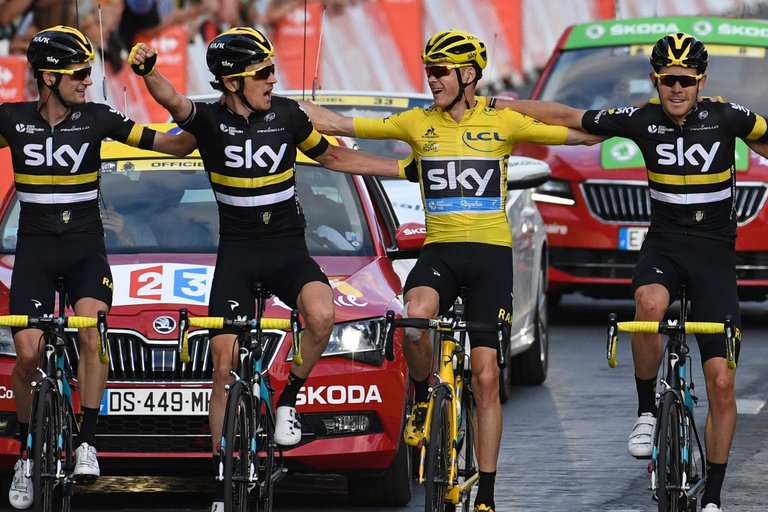 Since I was out of the country for the past few weeks, I wasn’t able to follow this year’s Tour de France as closely as I would normally like. As usual, it was filled with lots of unique achievements, impressive individual performances, and crazy events. But, judging from the reports, it was also a race that lacked much in the way of drama, as Team Sky’s Chris Froome rode to a third victory with few challengers emerging.

The biggest challenge to Froome’s dominance was expected to come from Team Movistar’s Nairo Quintana. The Colombian rider has looked strong in the past two Tour’s and seemed poised to break out this year with a performance that would push Froome to the limit. That never happened however, and for the most part it seemed that Quintana struggled to keep pace. In fact, if not for a herculean effort in the final few days, he would have finished off the podium altogether. He did manage to claim third place, finishing behind Froome and Romain Bardet of Team AG2R.
For Froome, this was his third win in four years. His string of dominance began in 2013, although he crashed out of the race in 2014 and was unable to defend his championship. Over the past two years however he has looked untouchable, with every challenger being turned away. His most vulnerable moment came this year however, when the British rider (by way of Kenya) actually ran up the slopes in Stage 12 of the race after his bike frame broke during a crash. It was an odd scene to say the least, but it showed his fighting spirit and unwillingness to give up in the face of adversity – something that has helped endear him to cycling fans who have been slow to embrace the champion.
In other Tour news, Tinkoff rider Peter Sagan went home with the Green Jersey once again. The current world champion showed why he is one of the most talented and versatile cyclists in the world, easily amassing enough sprint points to outpace his rivals. Russian rider Rafal Majka claimed the Polka Dot Jersey for the King of the Mountain’s classification, which is given to the best climber each year, while Aussie Adam Yates took the White Jersey awarded to the best young rider under the age of 25.
While I didn’t get to see much of this year’s race, the complaints I’ve ready mostly center around the fact that there was almost no drama at any point. Froome’s rivals didn’t challenge him much at all, and it was pretty much a foregone conclusion that he would win the Tour by the midway point of the event. That doesn’t make it very interesting to watch. Some of the riders were clearly playing safe since the Olympics are now just a few weeks away, and they’ll be competing for gold in Rio instead. But still, it would be nice to see someone – anyone – attempt to unseat Team Sky and their leader. Sadly, we’ll now have to wait until next year to see if that can happen. At this point however, it looks like barring an accident, the only person who can beat Chris Froome is Froome himself.