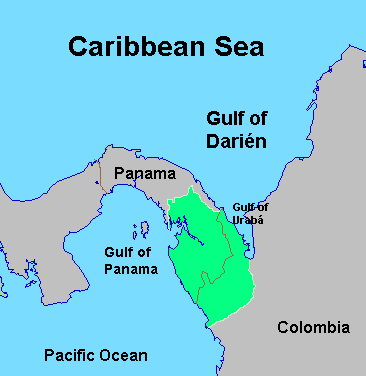 Looking for an engaging read to keep you occupied heading into the weekend? Then look no further than Outside Online, where you’ll find a great piece by Jason Motlagh that takes us into the “World’s Most Dangerous Jungle.”

In the article, Motlagh travel to South America to explore the infamous Darién Gap, a 160 km (100 mile) long and 50 km (31 mile) wide stretch of land between Panama and Colombia that has remained remote, wild, and completely untamed for centuries. A haven for drug-runners and rebel guerrillas that are a part of the Revolutionary Armed Forces of Colombia (FARC), the Gap is known for its thick forests, murky swamplands, and twisting rivers that have all conspired with one another to make it a nearly impassable barrier for those traveling through what is best characterized as one of the most impenetrable places on Earth.

Just how challenging is it to cross the Gap? Consider this. The 30,000 km (19,000 mile) Pan American Highway runs nearly unbroken from Prudhoe Bay, Alaska, to Ushuaia, Argentina. I say mostly unbroken, because the one stretch of road that has never been completed is the section that is encompassed by the Darién Gap. That isn’t to say that it can’t be crossed however, as a 1960 expedition led by Land Rover proved. But it took the team 136 days to do so, covering an average of just 201 meters (220 yards) per hour.

Today, the Gap is also a major highway for smugglers looking to move immigrants across South America and north towards the U.S. Unfortunately, the way through the jungle is incredibly difficult, and many who enter never come out the other side. Over the years, explorers, journalists, researchers, and even adventure travelers have been swallowed up by the jungle there, never to be seen again. To say that this is one of the most dangerous places in the world would be an understatement, which is why it remains utterly fascinating as well.

Motlagh’s story is a long, but incredibly interesting one, as he travels into the Gap to meet with FARC officials and to witness first hand the human trafficking that takes places there. His tale provides some perspective on this unique place, and just how difficult it is to travel through. It will also give you some idea why most people who travel along the Pan American Highway avoid it altogether, choosing to take a ferry around the jungle instead.

Read the entire story here and ponder what exactly it must be like in this dark, dangerous corner of our planet.