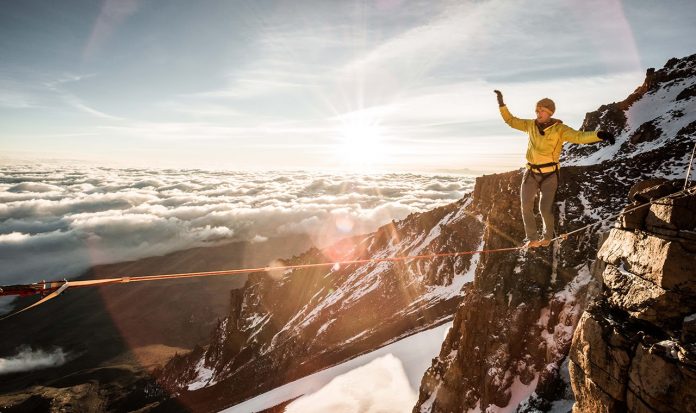 This past weekend, Swiss alpinist Stephan Siegrist set a new record for the world’s highest slackline by walking across a highline that had been set up at 5700 meters (18,700 ft) on Mt. Kilimanjaro in Tanzania. His efforts weren’t without their challenges however, as gusting winds, low oxygen levels, and even snow conspired to make his walk a difficult one.

The 43-year old Siegrist set up a 21-meter length of line between two rock towers located at the Arrow Glacier Camp on Kili. The rope was set at a height of about 150 meters (492 feet), which left it exposed to the elements, which included a rise in gusting winds as the day went along. The weather forecast even included snow, which doesn’t happen often on Kilimanjaro, but is possible when conditions are right just about any time of the year.

While slacklining balance is always a key, but at such high altitudes the body reacts slower to just about any physical challenge. That was the case here as well, as Siegrist found it difficult to make progress, even though he is very experienced at the sport. Eventually he did manage to cross the line successfully however, officially establishing the new record.

Slacklining has continued to grow in popularity in recent years, particularly as more people like Stephen put up impressive results in remote places. The previous record had been set last year in the Ladakh region of India. That mark was established by Hungarian climber Bence Kerekes who walked a line at about 5300 meters (17,388 ft). These records are most unofficial of course, as there is no real governing body to that oversees the claims.

While I’m not much of a slackliner myself, I can’t help but be impressed by these attempts. One only needs to look at the image above to get a sense of great the view was where Siegrist was walking. I suspect we’ll only continue to see these daredevils push the sport to new heights, both literally and figuratively. I’m sure someone is already planning such an attempt in the Himalaya.

Congrats to Stephen on his new record.