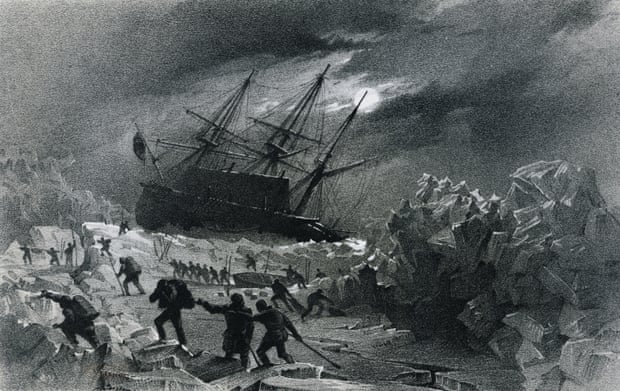 After years of searching in the Arctic, the missing ship of explorer Sir John Franklin has been found at long last. Earlier this week it was announced that the HMS Terror, a vessel that Franklin was using to explore the icy waters of the Northwest Passage, had been found after 168 years.

Franklin and his crew had been exploring the Arctic Ocean north of Canada back in 1848 when they ran into thick pack ice that prevented them from continuing their voyage. Both the Terror and its sister-ship, the HMS Erebus became trapped, forcing everyone onboard to abandon the two vessels. Eventually, all 129 members of the crew perished in the Arctic, and what became of the ships remained a mystery.

A few years back the Erebus was discovered by a search crew, but the location of the Terror remained a mystery. Now, thanks to a tip from a local Inuit tribesman, that mystery has been solved. The Terror  was found in – of all places – Terror Bay, where its mast was spotted sticking out of the ice by passing hunters a few years back. That tip led to an archeological team going to the site to check out the area, only to discover the very vessel they had been searching for.

According to early reports, it seems that the ship is in relatively good condition, and may contain most of the things that were left onboard when it was abandoned by Franklin and his crew. In comparison, the Erebus has suffered hull damage, and Arctic currents had spread out its contents over a wide area. It’ll be some time before salvage crews can truly get a look at the Terror however, so just what might be on the ship remains a mystery.

As for Franklin and his men, it seems that after they abandoned their ships, they began a long and perilous march across the Arctic with the hopes of reaching the Hudson Bay Company – a fur trading outpost far to the south. None of the men made it to the safety of that place however, vanishing in desolate white expanse of the north. Inuit oral histories talk about the foreigners passing through their area, but their ultimate fate has never been fully told.

The disaster that beset the Franklin crew is one of the worst in British naval history. It was quite a blow to that country, which ruled the seas and was pushing the boundaries of exploration at the time. Now, after more than a century and a half, at least part of the mystery has been solved.