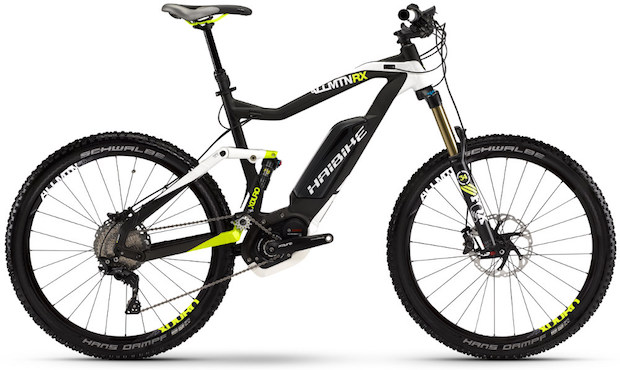 One of the hottest trends in cycling over the past couple of years has been the rise in prominence of the electric bike – more commonly known as the e-bike. At first glance, most of these bikes look like just about any other that you might encounter on the road, although they have a hidden secret. They come equipped with a battery-powered motor that can help you maintain higher speeds with less effort or climb tough hills that would normally leave your legs crying out in agony.

This little speed-boost has made e-bikes especially popular with commuters, many of whom find that the onboard motor helps them travel along with traffic better and allows them to arrive at their destination relatively fresh thanks to not having to exert as much energy.

An avid biker myself, I’ve been intrigued with e-bikes for some time, but hadn’t gotten the chance to try one out for myself. That changed recently when Haibike sent me one of their electric assisted mountain bikes to take for a spin, and I have to say I came away impressed. The bike delivered on everything that was promised – and more – allowing me to power through a ride like never before. But in the end, it also left me reevaluating why I like mountain biking so much in the first place.

For my little e-bike test drive, Haibike sent me a 2015 model known as the Xduro AllMtn RX. The current model that fits pretty much the same specs is the Xduro AllMtn 7.0. Both versions sport Shimano components, 27.5″ tires, a full-supsenion, and a slick looking design that looks aggressive and fun to ride. Hidden inside the aluminum frame however, is a 36-volt motor that is powered by a 500 Wh battery that help this bike truly stand out from the crowd.

Before we go too far into this review, it is important to point out that while most e-bikes provide an electric assist, but you still have to do all of the pedaling. You simply don’t have to pedal quite so hard in order to get the bike up to speed nor to maintain that speed. Likewise, when climbing a hill, the speed-assist kicks in to lend a hand, making it surprisingly easy to shoot up steep grades, although you still have to put in some work to get to the top.

The motor installed on this bike has five different settings, including Eco, Tour, Sport, and Turbo, as well as off. Yes, you can ride the bike without any type of electrical assist, but since it tips the scales at 49.2 pounds, it does feel a bit slow and ponderous. Eco mode provides the least level of assistance, which doesn’t feel like much, although it is there to lend a hand when you need it. Turbo is bit like strapping a rocket to your bike, although it comes at dramatically reduced battery life.

While testing the Xduro, I only switched over to the highest level when tackling a big hill, otherwise I tended to stay in Tour mode most of the time. This allowed me to easily maintain a good rate of speed over a variety of terrains without having to expend a lot of energy in the process. The result was that at the end of my ride, I still felt like I had a good workout, but I wasn’t completely wasted, even after riding a tough trail.

The Xduro AllMtn has a built in cycling computer mounted on its handlebars that provides information such as your current speed and time, as well as offering a trip odometer, and life-time odometer all in a digital format. That same display also provides constant updates of how much battery life remains by showing not only a battery indicator but also the amount of range the bike has before it runs out of juice. The screen also has an icon that indicates which level of power that the motor is set too as well.

Getting on the bike for the first time, I was unsure exactly how things worked. The motor was engaged, but there is no throttle that you can control, so I wasn’t exactly sure how I’d know if it was working properly. It only took a second to figure that out however, as when I started to pedal you could feel the electric assist kick in with a very noticeable boost, even in Eco mode. That boost only became more noticeable as increased the level of power generated by the motor.

Before too long, I found myself testing the bike to see what it could do in a variety of different conditions, and for the most part it performed very well. It wasn’t quite as agile and responsive as my Trek mountain bike back home, then again that bike doesn’t power up big hills as easily either. I have to admit, the Xduro AllMtn is fun to ride, and is quite capable of tackling a wide variety of trails types.

Now, all of that said, I have to say that I have a few reservations about this e-bike as well. For starters, it is a heavy beast. As mentioned, it is nearly 50 pounds (22.68 kg), which makes it more than twice as heavy as my normal ride. That added weight becomes more evident on tougher trails where agility can be an important factor. And heaven forbid you should run out of battery power while riding, as it would definitely be quite a workout to get Xduro back to the trailhead without the electric assist.

Despite how much fun I had riding the bike, I also couldn’t help but feel like I was cheating a bit out on the trail. Part of the allure of mountain biking for me is taking on the challenges of the route with just my bike. That includes all of the challenges, such as climbing hills and maintaining a good speed. This bike made that so easy to do that it almost felt like an entirely different sport. At the end of my test run, I came to the conclusion that while I wouldn’t mind an e-bike for commuting around town, I’m not sure I want one to replace my mountain bike.

That said, for riders who are a little older, or aren’t quite as physically fit, the Xduro AllMtn is a good solution that allows them to ride challenging trails much more easily. I can definitely see the allure of this bike under those circumstances.

Durable and well-built, the Haibike Xduro AllMtn 7.0 is competitively priced at $5299. It has quality parts and components at every important spot, and a tough aluminum frame with solid geometry. It also happens to have a secret weapon hidden away in the form of an electric motor. All of that design and technology doesn’t come cheap, although I’ve seen plenty of standard mountain bikes that fall in the same price range, even without a motor. Of course, those bikes are likely to have even better components and a carbon frame, just to put things in perspective.

If you’ve been considering an e-bike for your mountain biking needs, I’d certainly encourage you to give the Haibike Xduro AllMtn a look. It is a great machine for the right rider. I’m just not sure if that rider is me.

Find out more at Haibike.com.