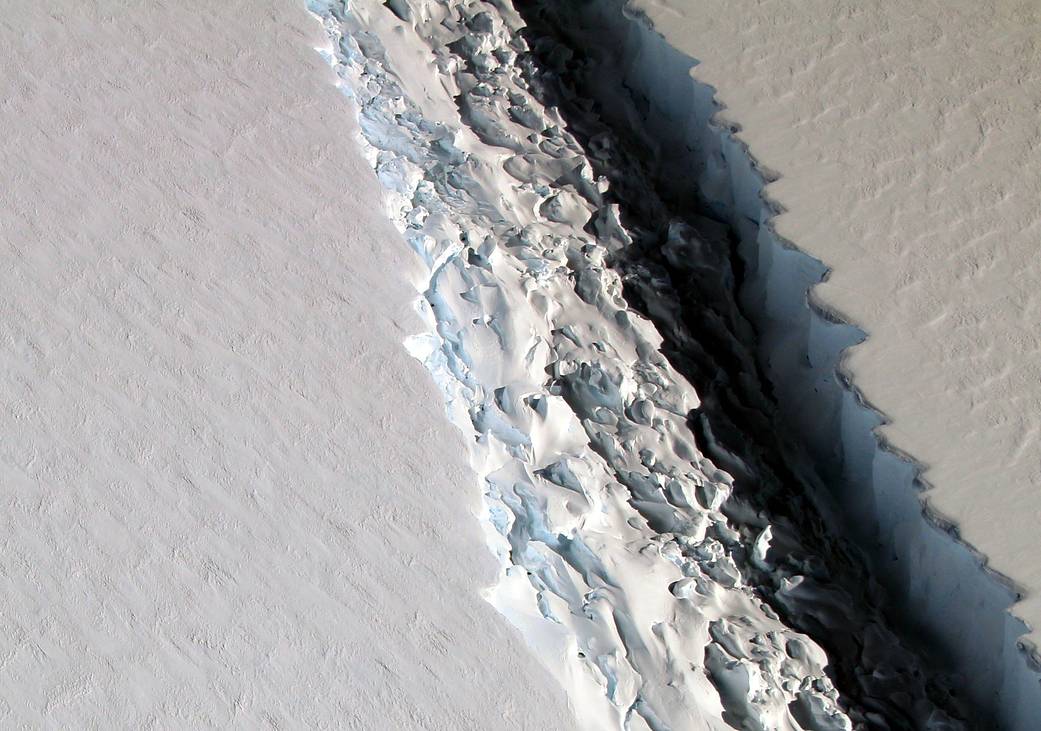 Last week I posted a article about how climate change was causing the collapse of ice sheets in Antarctic, and today we have another sobering story to share. It seems that NASA has found a massive rift on the Larsen C Ice Shelf on the frozen continent which will eventually cause a massive chunk of ice – the size of state of Delaware – to break off and fall into the ocean.

The crack, which measures 300 feet (91 meters) across, was discovered on November 10 as NASA researchers were making a flyover of the region as part of a survey of the shifting ice in Antarctica. This is the eighth consecutive year that the so called “IceBridge” team has traveled to the bottom of the world to measure the impact of climate change on the Larsen Ice Shelf, and their findings were startling even to them. The crack extends for more than 70 miles (112 km) and is a third of a mile (.5 km) deep.

The massive rift doesn’t go entirely across the ice shelf – at least not yet. But once it does, the chunk of ice will collapse, sending it into the ocean. For the researchers studying the changing area, this isn’t a matter of “if” this will happen, but “when.” It seems to be only a matter of time at this point, particularly since the crack has only continued to get wider and longer since the survey was there last year.

As mentioned in the article I posted last week, the collapse of the ice shelf itself won’t lead to increased sea levels since they are already displaying massive amounts of water. But the removal of this ridge will clear the way for other sheets of ice on the Antarctic continent to flow into the Southern Ocean, which will cause water levels to rise globally. In this case, a sheet of ice roughly the size of Scotland is behind the Larsen C Ice Shelf. That entire section of ice will then become vulnerable and start melting into the sea.

This section of Antarctica has seen both air and water temperatures rise in recent years, which is of course having an impact on the ice there. The alarming thing in these photos isn’t necessarily the size of the rift, but how quickly it is growing. Climate change seems to be out-pacing some of the predictions and models that we’ve seen in the past, at least in this area of the world. What that means for the future remains to be seen, but it is sobering to say the least.