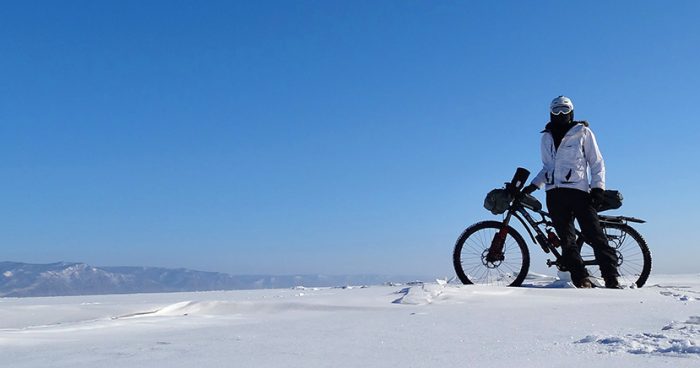 Over the years, there have been a number of cyclists who have quite literally ridden around the world on their bikes, circumnavigating the globe under their own power. We’ve even followed a few of them on their adventures here on this blog. But, German rider Patrick Schroeder is setting an entirely new bar for others to follow, by attempting to ride his bike through every country in the world. All 195 of them.

Over the holiday break, the team over at Gear Junkie posted a story about Patrick, sharing his goals to pedal his way across the globe. Ten years ago, he set out from his home country at the age of 19 to see where he could go on his bike. At the time, he didn’t really have any goals for his ride, nor did he have a plan. But over time, and as the years, passed, he decided that he wanted to pursue his goal of cycling through every country on Earth.

Patrick says that after he completed school and military service, he spent a year traveling around the world. After that, he got into bike touring, with his first big adventure being a ride from Germany to South Africa. He also rode from Germany to China – and back – as well as Argentina to Canada. Along the way, he has now ridden his bike in 141 countries, leaving him 54 more to go.

In the Gear Junkie article, Patrick talks about the equipment that he takes with him, his current bike (a custom MyBoo Densu), as well as ones he has used in the past, his favorite pieces of gear, and more. He also talks about the things he’s learned on his bike journeys, the hardest place he’s traveled through, the extraordinary things he has seen during his travels, and the things he hasn’t done yet that he would still like to do.

Perhaps most interesting is his list of gear that he has taken with him, both on his 2008 bike expedition and on his 2016 journey. As you can imagine, things continue to evolve over time, with new and better gear being released regularly. For instance, on his 2008 list he has an iPod Nano, but now he uses a smartphone instead. His gear has been reduced in weight nicely too. In 2008, his kit weight about 55 pounds. Today, it’s down to 26 pounds. That’s some impressive gains to say the least.

If you’re interested in long-distance bike travel, this is a story that you’ll want to read. But beyond that, it is just really interesting to see what Patrick is doing. No word on where he is headed next, or how he’ll knock off those remaining countries, but follow him on hit Facebook page to stay updated.