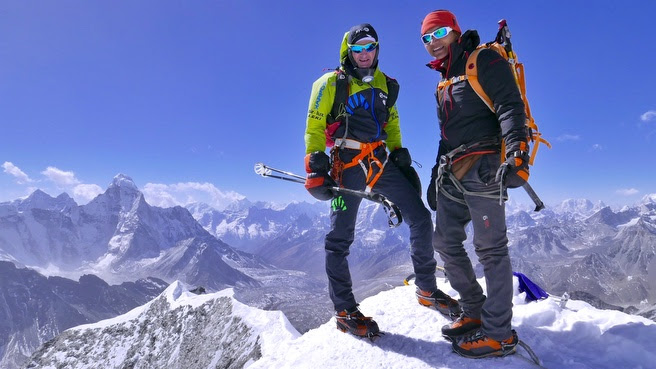 The spring climbing season in the Himalaya is still well over a month from getting under way, but already some of the world’s top climbers are preparing for the challenges ahead. Take Swiss alpinist Ueli Steck, who is getting ready for what could be the most difficult undertaking of his illustrious career. And to prepare for that expedition, Ueli is already in Nepal and training for what he expects to be a major undertaking.

This spring, Ueli hopes to summit not only Everest, but its neighbor Lhotse as well. While it is a bit unusual to bag both summits in a single season, it’s not completely unheard of with other mountaineers completing that challenging in the past. But, Ueli will attempt to nab both summits in a single go, first topping out on Everest before returning to Camp 4 for a brief rest, and traversing the narrow ride that connects the two mountains, and going straight for the summit of Lhotse as well.

Steck will be joined on this venture by climbing partner Tenji Sherpa, and to prepare for their expedition the duo have already been training in Nepal. Ueli and Tenji recently summited the 6180 meter (20,275 ft) Island Peak. Additionally, while training in the Khumbu Valley, Ueli has also been doing a lot of running, saying that he has covered a distance of 150 km (93 miles) and a vertical climb of around 12,000 meters (39,370 ft).

After spending three weeks in the Khumbu, Ueli will now head home for another three weeks of training in the Alps, before returning to Nepal to attempt the Everest-Lhotse traverse. My guess is that he’ll be back in the country early in the season, do some more acclimatization in the valley ahead of the start of climbing season, and will be ready to take on the challenge as early as he can. We’ve seen Ueli dash up to the summit of Everest before, staying well ahead of the normal crowds, and he is likely to do that again. In fact, a few years back he was amongst the first to summit, following behind the rope fixing team as they installed the lines to the top. I wouldn’t be shocked to see him do the same thing again in an attempt to avoid the crowds that would surely slow him down from his normal amazing pace.

It won’t be long now and we’ll begin to see more stories of training and final prep work for the start of the season. By the first of April, the teams will begin arriving in Kathmandu and things will get really interesting. Right now, it’s the calm before the storm, and we still have a winter ascent of Everest to watch closely too.