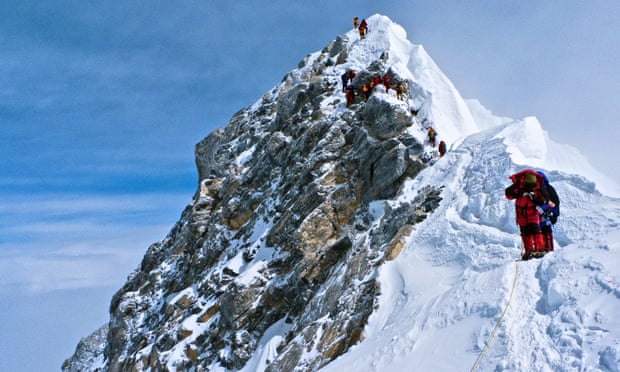 There has obviously been a lot of interest over the past week or so on the current status of the Hillary Step on the South Side of Everest. Last Thursday, it was widely reported that this iconic section of the route was now gone from the mountain, leaving many to ponder how it would impact future expeditions, while others mourned the loss of one of the most well-known landmarks on the most famous mountain on the planet. But, is the news of the Hillary Step’s demise premature? Apparently, that depends on who you believe.

As I pointed out in my story from last week, speculation of the collapse of the Hillary Step following the 2015 earthquake first appeared last season. Those reports were quickly dismissed however, with Nepali officials, climbers, and guides saying that it was still there, it just happened to be covered in snow and ice, making it appear different than it had in the past. Now, that seems to be the same story being weaved once again this season.

According to this story from the U.K.’s Guardian newspaper, Nepalese climbers say that he Hillary Step is once again still there and intact, but is just covered with snow. The story quotes Ang Tshering Sherpa – chairman of the Nepal Mountaineering Association – as saying “The Hillary Step is in its old position. [It is] intact, except that there’s lots more snow on it so the rock portion is not easily visible.”

This runs directly counter to reports that have come in from other mountaineers, including the Brit Tim Mosedale who was the first to break the story when he summited last week. He left little doubt that the step was no gone and that it would eventually have an impact on the route to the top of Everest.

Another Nepali, Pasang Tenzing Sherpa, claims that the route up the Hillary Step was altered last year by the team fixing the ropes. After not seeing any traffic for two seasons, there were no obvious ways past the obstacle, so the route was altered slightly. Pasang says that it now sits a little further right, obscuring the view of the Hillary Step to a degree. Extra snow and ice cover the spot too, changing the appearance some.

For his part, Mosedale is sticking with his story. He told The Guardian the Step simply isn’t there, and it could spell trouble. “This year and last year a snow ridge formed which we were able to ascend with relative ease. But in future years, if the ridge doesn’t form, it could be a particularly difficult area to negotiate. The loose debris comprising some rocks that look to be precariously perched and ready to slide could be very hazardous indeed.”

Everest blogger Alan Arnette has weighed in on the subject with an article he posted yesterday. Much like the rest of us, he’s confused by the conflicting reports too, but says that judging from the photos it  looks like things have at the very least moved some. Excess snow is making it hard to tell for sure, but judging from the photos he shared, it appears that the Step has been altered.

The photo on the left was taken by Tim Mosedale during his recent summit, while the one on the right was shot by Jamie McGuiness back in 2008. To my untrained eye, they do look very different, although I’ll admit that the snow is playing a role in that.

So, is the Hillary Step still there? We’ll probably have to wait for other climbers to weigh in to know for sure. We could learn more soon as the current round of summits plays out, but until we get a season with less snow on that portion of the mountain, we might not have a clear understanding of what this section of the route looks like at this point. Hopefully it isn’t as precarious as Mosedale has made it sound, as it could cause problems in the future.