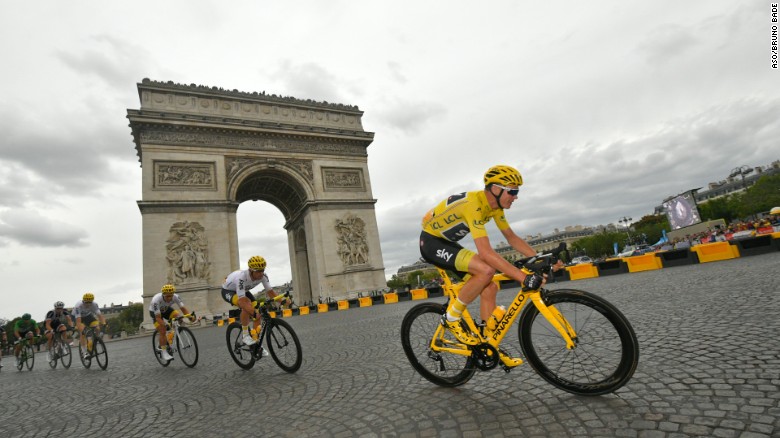 It’s a bit of old news at this point, but since I generally follow the Tour de France quite closely, I thought it was worth posting an update on the final results of the race nonetheless. Yesterday, Chris Froome rode into Paris wearing the Yellow Jersey, claiming his fourth victory in the race over the past five years, despite the fact that it was his most competitive race to date. As usual, he was fairly dominant, even though at times the British the rider showed more vulnerability than in the past. But, with his fourth win, he also stands on the edge of cycling immortality with the potential to join the sport’s all-time greats with another victory in the future.

Heading into the final weekend, Froome led the race over Romain Bardet and Rigoberto Uran by 22 and 29 seconds respectively. Those were the tightest margins he’s had in any of his victories so far. But, on Saturday, a 22 km time trial left little doubt who was the better rider. Both Bardet and Uran would surrender time to their rival on that stage, with the two men actually swapping spots in the standings. In the end Uran finished 54 seconds off the pace, while Bardet was 2 minutes 20 seconds back.

When I posted an update following week 2, it appeared that sprinter Marcel Kittel had a commanding lead in the Green Jersey competition awarded to the Tour’s top sprinter. But, he ended up having to abandon the race on Stage 17 following a nasty crash, and surrendered his jersey to eventual winner Michael Matthews instead. The Polka Dot Jersey for the best climber in the race was awarded to Warren Barguil, while the White Jersey for the best young rider went to Simon Yates. As has been typical over the past six years, Froome’s Team Sky won the team competition as well.

With the race now over, the riders will look ahead to the rest of the season before thinking about the next Tour in 2018. At that point, Froome will be looking for his fifth win in the event, which would put him in rarified air with the likes of Eddy Merckx, Bernard Hinault, Jacques Anquetil, and Miguel Indurain, the true greats of the Tour de France. It remains to be seen if the can get that fifth win however, as the race is always a grind and can be very unpredictable. Plus, some of Froome’s rivals will come better prepared and more willing to challenge him after sensing a bit of vulnerability on his part this year. Still, he remains the man to beat heading into next year’s event too. We’ll just have to wait to see if he can pull off another win and in the process make history.

Just 49 more weeks until the next Tour de France gets underway.