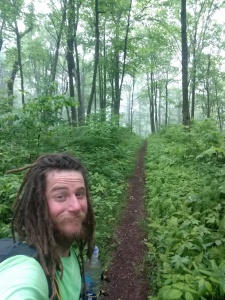 A through hiker by the name of Dan Binde is claiming a new speed record on the Appalachian Trail. Binde says that he completed the entire length of the 2200 mile (3540 km) route in 53 days, 22 hours, and 57 minutes, which if true would be the fastest recorded time for an unsupported hiker.

According to a story posted at GearJunkie.com, Binde says that he began his hike on Spring Mountain in Georgia – the southernmost end of the AT – back on May 26 at 2 PM. From there he hiked north until reaching Mt. Katahdin in Maine on July 19 at 12:57 PM. He used a SPOT device and GPS tracker to record the hike, although there seems to be some dispute over whether or not the numbers are accurate.

In order for a hiker to receive “unsupported” status, he or she must complete the route without any outside assistance, carrying all of their own gear and supplies for the trek themselves. Of course, they also aren’t allowed to ride in any vehicles along the way either. Binde seems to have met those qualifications, but there are some questions about the data he has shared from his SPOT tracker.

Anyone who has ever used a SPOT device probably knows that they can be problematic at times. Often times they will quit working altogether or have spotty transmissions due to heavy tree coverage. But, they are still a useful device to have for tracking progress in the backcountry and calling for assistance should the need arise. Unfortunately, Binde’s tracking record has some large gaps in it that make it difficult to verify all of his claims, although it does appear that he hiked the AT end-to-end.

GearJunkie has a lot more details about Binde’s training and experience on the AT, as well as the obstacles he had to overcome along the way. He is an experienced hiker with plenty of long distance trails under his belt. He also plans to complete both the Pacific Crest Trail and Continental Divide Trailthis year. Both of them have been partially hiked already as a method of preparing for the AT.

If his AT record withstands scrutiny, he’ll have broken the previous record set by Heather Anderson in September of 2015. That mark is 54 days, 7 hours, and 48 minutes. Of course, the overall speed record belongs to Karl Meltzer, who finished the route in 45 days, 22 hours, and 38 minutes, although that was in a supported fashion.