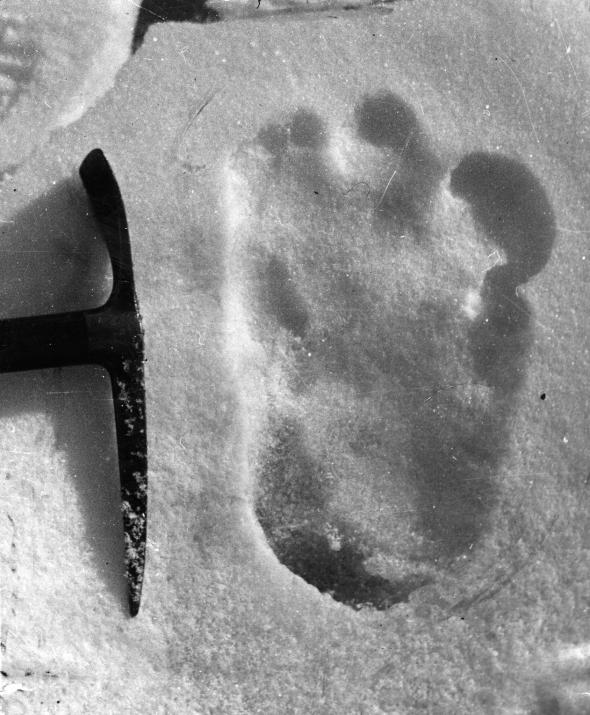 National Geographic has an interesting story posted online. The article is an interview with Daniel Taylor, who recently wrote a book entitled Yeti: The Ecology of a Mystery, in which he examines the history of the famous “wild man” of the Himalaya, while the author himself goes in search of the mythical animal himself, making some surprising discoveries along the way(Who Searched for the Yeti).

In the interview, Taylor talks about how a photo of an unusual footprint found in the snow of the Himalaya by British explorer Eric Shipton back in 1951 sparked the imagination of millions across the globe. The photo purportedly shows a track that looks rather man or primate like on the Menlung Glacier.

Shipton found the footprint, which was allegedly 13 inches (33 cm) in length, while trekking across the glacier in search of a new route to Everest. He photographed it, shared it with others, and the mystery of the Yeti was born.

At the time, Taylor was a young boy living in India where his parents managed a hospital. Like many others, he was captivated by the story and spent part of his life delving into the mystery that is the Yeti. Along the way, he became familiar with a remote section of Nepal called Barun, which is home to a jungle that is so thick that few people have ventured inside. The idea was that if the yeti existed, it probably was hiding inside.

Taylor never found the abominable snowman as the yeti is often called, but he did find a creature called a tree bear that made its home in the Barun region. The tracks of the bear resemble those that were found by Shipton, although there are still many mysteries that surround the story, including how the footprint was found on Menlung Glacier to begin with.

The article not only takes a look at the history of the search for the yeti (both Hillary and Messner searched for the creature), but Taylor’s own efforts to protect and preserve Barun, leading to the creation of the Makalu-Barun National Park.

But beyond that, there are also some thoughts on the legendary creature and whether or not it has ever actually exited.

Fascinating stuff for those of us who enjoy tall tales and the mountain culture of the Himalaya. Read the entire story here.