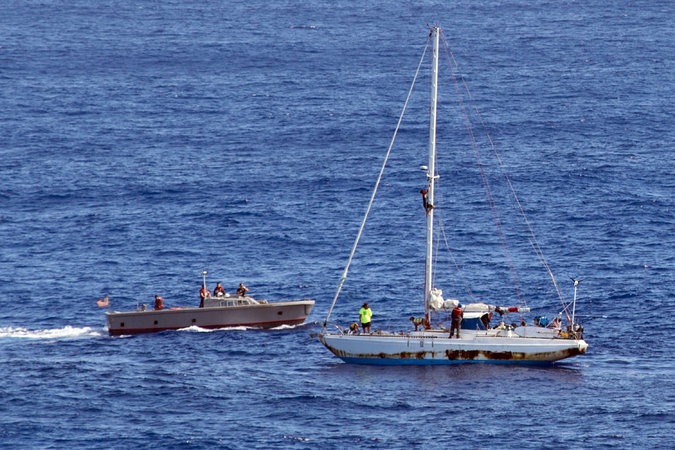 Remember the story I posted a couple of days back about Jennifer Appel and Tasha Fuiava, the two women who were lost at sea for five months? The two ladies had left Hawaii back in May with the intention of sailing to Tahiti, but lost their engine and sails while en route and drifted for weeks until being rescued. Now that their story is being told, some experts are coming forward to call foul on some of their claims.

One of the biggest questions about the entire story is why the women didn’t use the Emergency Position Indicating Radio Beacon (EPIRB) that their ship was equipped with. They claim that they lost their satellite phone on the first day of the journey, and that they were using a standard radio to call for help, but they didn’t turn on the EPIRB at any point. Appel and Fuiava say that they never felt that they were in any real emergency situation where they could die within a 24 hour period, so they decided not to activate it. That may seem reasonable on the surface, but after five months at sea, I think they could have hit the button on that device.

The two women also claim that they were hit with a massive storm while sailing to Tahiti, with winds in excess of 60 mph (96.5 km/h), which is what swamped their engine and broke their mast. But, there are no records of such a storm occurring, and NASA satellite images don’t indicate that there was such a weather anomaly at the time they set out. In fact, meteorologists say that such a storm would be extremely rare in the Pacific during the month of May.

To add to the mounting questions, Appel and Fuiava have also said they were sailing through shark infested waters, and that the sharks would approach their vessel and slap their tails against it in warning. One of the ladies even said the sharks were teaching their young to hunt by attacking the boat. But, shark experts say that such behavior is completely unknown to them and has never been recorded. Instead, they say that it sounds like something more out of the movie Jaws than real life.

On the other hand, the two women have also admitted that they are completely inexperienced sailors who thought they could make this voyage even though they really didn’t know what they were doing. It is possible that they simply are so green that they didn’t understand what was happening to them, or maybe didn’t even know how to activate the EPIRB. Still, glaring questions remain about the story and its veracity. The evidence seems to be mounting against them, although if they did fake the entire thing, it remains unclear as to where they were for the past five months.

Life is indeed stranger than fiction.