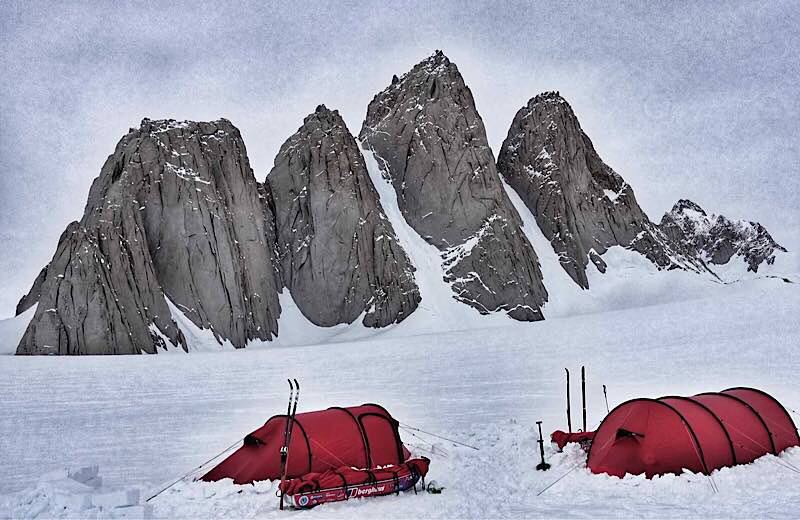 The 2017 Antarctic expedition season continues to unfold at the bottom of the world. Unlike our last update, most of the skiers are now reporting good weather, although surface conditions remain challenging with sastrugi and soft snow making for slow going at times. Still, the teams that we’ve been following closely continue to forge ahead, making progress toward their individual goals.

Ben Saunders has been out on the ice longer than anyone and he’s being reminded of the challenges of going solo. Back in 2014 he made a round trip expedition to the South Pole and back to the coast with Tarka L’Herpiniere and the duo split duties breaking trail. That helped to give each of them a break from being the lead man, but perhaps more importantly also provided some companionship on the hardest days. On his current traverse of the frozen continent, Saunders has neither someone to split those duties with nor anyone to keep him company either. That has worn on him some, causing him to grow tired more quickly. As a result, he’s being more conservative with his efforts.

Still, the British polar explorer continues to make good strides forward. He’s been knocking off 12-14 miles (19-22 km) per day and now has 688 miles to go before he’s done. That is still a considerable distance, but he has now passed the 85ºS mark and has his sights set on reaching the Pole before he begins his return trip to the coast at the Ross Ice Shelf.

Speaking of making good time, Scott Sears – aka the Antarctic Ghurka – has found his rhythm and is covering solid distances most days now. Yesterday he managed to cover 40.1 km (25 miles) in a little more than 12 hours of skiing. In Antarctic terms, that is flying and he should be very pleased with the progress. He also passed the 84th degree, and is making his way towards Thiels Corner on the edge of the Thiel Mountains. That’s a milestone for anyone skiing to the South Pole as most make a turn there and begin heading more directly towards 90ºS.

So far, Scott seams to be in excellent spirits and is enjoying his expedition. He hopes to become the youngest person to ski solo for the full distance to the South Pole, and right now that seems like an attainable goal. He is starting to get low on podcasts that he downloaded prior to setting out, which have kept him company on the journey however, but it seems unlikely that will hinder his progress too much.

Elsewhere, the Ice Maidens have reached a major milestone on their journey across Antarctica as well. The six ladies who make up the team have now reached the halfway point to the South Pole, which is remarkable considering their late start. Poor weather conditions kept them grounded at Union Glacier for far longer than they would have liked, but they’ve definitely been making up for it since. They are hoping to become the first all female team to traverse the continent under their own power however, so the Pole itself will just be their halfway point too. So far, everything is going well.

Finally, the Spectre team made it to the foot of the mountain this past weekend and have now established Base Camp there. They’ve already been scouting the rock towers they hope to climb there, but have discovered some unexpected challenges. For instance, a section of the mountain that they thought might be skiable, or at least make for an easier descent, is actually a 70º wall of blue ice. Obviously they’ll have to look for a different route than they had planned, but such is life in the Antarctic.

The team planned on spending yesterday traversing the Spectre rock towers to look for alternative exits, but they have announced any plans yet. They’ve been enjoying a few days of staying in one place after battling their kites for a couple of weeks just to get to the mountain. Soon, they’ll begin their ascent, weather permitting of course.

That’s all for today. I’ll continue to keep an eye on things down south in the days ahead and share updates when applicable.