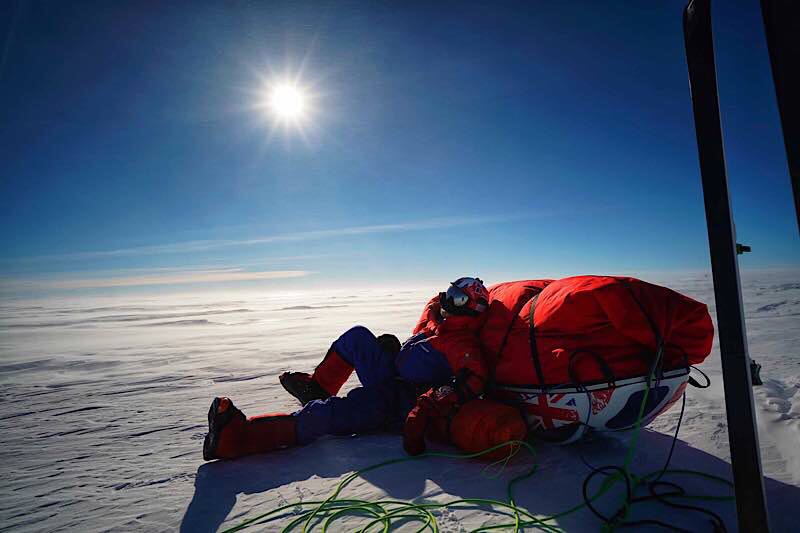 I wrote about the Spectre Expedition to Antarctica a few weeks back, just as the squad was preparing to get underway in the Antarctic. At the time, the team of Leo Houlding, Jean Burgun, and Mark Sedon were just finishing up their prep work in Punta Arenas and were getting set to fly out to Union Glacier. Since then, they have actually embarked on the journey and are now en route to their ultimate goal, the Gothic Mountains, where they hope to complete several climbs, including the second ascent of the Spectre, a 2020 meter (6630 ft) rock tower that presents a serious technical challenge.

The trio of climbers are actually using kites to ski across the Antarctic landscape, and so far they have met with moderate success. All told, they’ll need to cover some 2000 km (1242 miles) to complete the expedition as planned, which includes nearly 70 days of travel, 20 of which will be spent in the mountains where they expect to climb without fixed ropes, bolts, or drilling of any kind.

As with most antarctic teams, the Spectre squad found it challenging to get started, but are starting to find a rhythm out on the ice. The winds haven’t been all that cooperative thus far however, so they aren’t skiing the larger distances that they would like. Currently, they are tent bound with poor conditions, but over the past few days they’ve covered as little as 10 km (6.2 miles) and as much as 42 km (26 miles), which doesn’t sound all that bad by antarctic ski standards, but is’t much at all when you’re relying on kites to help you cover distances in excess of 100 km (62 miles) in a day.

The team had hoped to be at the Spectre by now, but they are still about 100 km shy of that goal, which means it could be a few more days before they set up Base Camp and begin surveying the rock spire. The original plan called for 10 days of travel to reach Gothic Mountains and begin the climb, but they actually thought they’d be there in 6 or 7 days total. Today is day 12, and they still haven’t arrived at their destination.

The forecast does call for improved conditions starting today however, so they are hoping to make up some ground. Sitting in their tent the past few days hasn’t helped their supply situation either, as they’ve begun eating into their food and fuel that was meant for use while on the wall. Hopefully they can overcome these early challenges and get to the Spectre within the next day or so. From there, they’ll be able to start the challenging ascent of the South Spur of the mountain. A route that hasn’t been taken before.