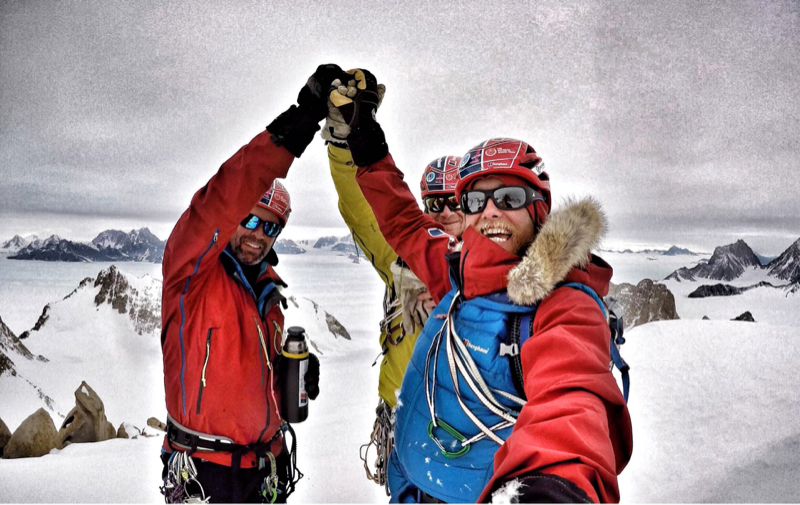 More news from the Antarctic today, where the expedition season continues to unfold at a fairly fast pace. The explorers who are making their way across the continent this year seem to continue to hit milestones on their way towards their own individual objectives. And while the season still has a very long way to go before it ends, it seems like it will be one of the more interesting years on the frozen continent in quite some time.

Will begin with an update on the Spectre team, which consists of Leo Houlding, Jean Burgun, and Mark Sedon. This trio of adventurers set off across the Antarctic via kite ski to reach the Gothic Mountains. Their plan was to climb a challenging rock spire called the Spectre by making the first ascent via the South Spur. Unfortunately, when they finally arrived there, they discovered that route that they had indeed to use for their descent was incredibly difficult, consisting more of blue ice and snow than rock and solid ground.

When we checked in with the team last week they were setting off on a traverse of the tower to look for alternate ways of getting back down. What they discovered that this rock face presented more challenges than they had first anticipated, so they had a quick change of plans and decided to change up their route and climb the North Side of the Spectre instead. That route was originally climbed by Mugs & Edmund Stump back in the 80’s and remains the best approach to the top.

On Sunday, the trio of climbers set out to complete their objective and while it was hardly an easy ascent, they did manage to top out. Along the way they had to deal with cold temperatures, unexpected winds, and a complex rock face that was tougher than they thought it would be. You can read their account of the climb here.

With ascent of the Spectre over, the team now has a couple of days before they have to begin the return journey. Before heading for home, they’re going to take on a traverse of a nearby ridge that will be a good challenge, but safer than attempting the South Spur, which is difficult enough that it now falls outside of their margin of safety. They hope to complete this new objective in a day or two, then begin packing for the journey back to the coast.

Meanwhile, Ben Saunders continues his tough slog up the Antarctic Plateu. He has reached an altitude of about 2000 meters (6561 ft), so the air is getting thinner and he still has a ways to climb before he is done. The weather has been fickle, at times sunny and warm and then quickly shifting to cold, windy, and with whiteout conditions. His daily distances are roughly 14 miles (22 km), which is enough to keep taking chunks out of his route. At the moment, he has about 620 miles (997 km) to go before he is done and about a month and a half before the season wraps up. Still very doable, particularly since he’ll pick up speed as he approaches the South Pole and on the return trip to the coast.

Finally, Antarctic Ghurka Scott Sears has been dealing with other challenges, most notably a malfunctioning iPod. He’s been using the device to help him get through the day by listening to music, podcasts, and audio books while he skis. But, the audio player has suddenly started running into issues which have provided him with complete silence instead. Scott says the silence was actually quite pleasant for awhile, but it makes his 12 hour days on the trail seem even longer than they actually are.

Scott’s pace has been extremely quick in recent days, knocking off 30+ km (18+ miles) or more each day. This has allowed him to ski past the 86th parallel and he is now quickly approaching the 87ºS mark. From there he’ll enter a zone that is well known for its sastrugi, which will likely slow him down and test the legs and stamina a bit. After that, it will be smooth sailing to the Pole however, which he may reach in time for Christmas.

That’s all for today from Antarctica. We’ll continue to keep an eye on things at the bottom of the world however, and bring updates where warranted.