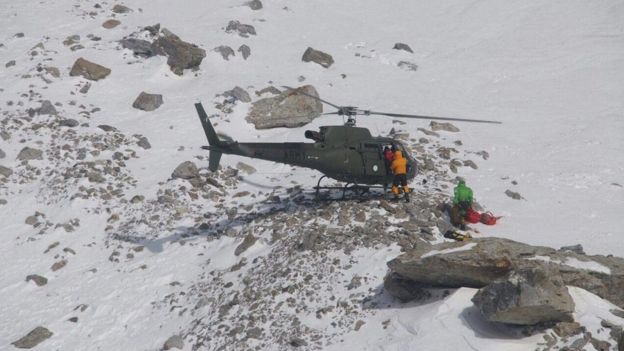 A week ago, the mountaineering world stood still as we all watched the events that were unfolding on Nanga Parbat as they occurred in realtime. It was a scary, crazy situation that played out like a movie, with a result that was both triumphant and tragic at the same time. Now that we’ve allowed a bit of distance to pass, we’re learning more about exactly what happened as survivor Elisabeth Revol shares her story.

According to Revol, she and Tomek Mackiewicz set out for the summit late last week as expected, The duo were attempt to become just the second team to climb Nanga Parbat during the winter, a project that Tomek had been focused on for more than seven years. The two climbers were successful in that venture, reaching the top of the 8125-meter (26,526 ft) peak late in the day. But, they had pushed their luck too far and arrived around 6:00 PM local time, which meant that they couldn’t spend much time at all on the summit.

To make matters worse, as they turned to go back down Tomek revealed that he had lost his eye site. Revol says that he hadn’t used a mask during the ascent because of the hazy conditions, and after hours of exposure he was suffering from snow blindness. The two carefully made their way back down the mountain with the Frenchwoman leading the way and her Polish climbing partner handing on to her shoulder.

From there, Mackiewicz’s condition only continued to deteriorate. His breathing started to become irregular and both climbers were suffering from frostbite. With exhaustion setting in, they knew they wouldn’t be able to reach their high camp, so they sought shelter at 7200 meter (23,622 ft) to try to wait out the night.

By dawn, Tomek was bleeding from the mouth and had mostly slipped into unconsciousness. It was then that Elisabeth called for help and was told that if she descended to 6000 meters (19,685 ft) rescuers could come get her and they could go up to retrieve Mackiewicz too. So, she moved the Polish climber into a crevasse for protection from the wind and started down the mountain.

But help didn’t come that day, and both climbers were forced to spend another night outdoors. It was then that Revol began to hallucinate believing that someone had come to bring her hot tea. She says that she believed that in order to repay them she needed to give them her shoes, so she removed her boots. She wandered around barefoot for more than five hours, which induced severe frostbite, the damage from which is still being assessed.

Eventually she was able to descend into one of the team’s campsite and as she arrived she saw two headlamps coming through the night. They belonged to Polish climbers Denis Urubko and Adam Bielecki who had flown by helicopter from Base Camp on K2, and put in their own superhuman effort to get up the mountain and locate Revol. They got her into a tent as soon as possible and began treating her for exposure.

The rescue team was also faced with a tough decision at that point. They had stabilized Elisabeth but she was still in danger, meanwhile Tomek was still further up the mountain and likely in critical condition if not already dead. If they went up to find him, there was a good chance they wouldn’t locate him at all, plus poor weather was setting in. They made the tough choice to stay with the Frenchwoman to ensure that she survived and got down safely.

Currently, Elisabeth is in a hospital in France where she is recovering and the damage from the frostbite is being assessed. There could be amputations still coming, although doctors are hoping to save her fingers and toes. A decision is expected on that process within a day or two.

As you can imagine, she is extremely emotional and still suffering from exhaustion and exposure. The entire expedition has been a challenge and at the end she was forced to make what is likely the toughest decision of her life. Leaving her friend behind was incredibly difficult and she will no doubt carry the emotions of that for a long time to come.

You can read more about the story here.