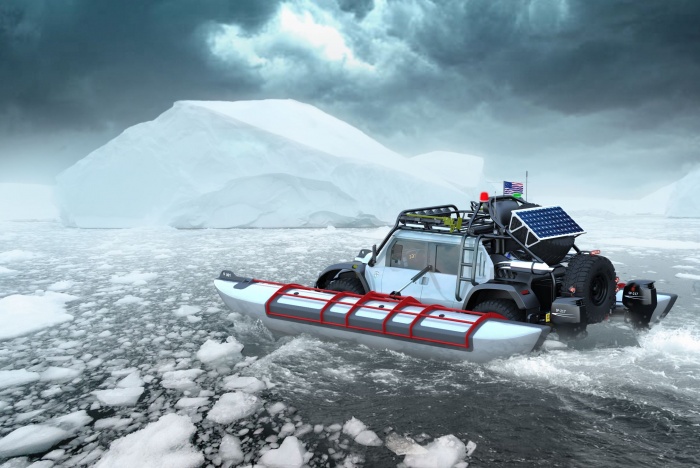 A small, boutique automaker best known for making supercars has announced ambitious plans to get into the SUV/off-road market by reviving the classic Baja Boot. The modern update to the custom-made dune buggy will then be through its paces on a series of increasingly difficult challenges that include setting a new high-altitude driving record and a crossing of the Bering Sea.

The company in question is Scuderia Cameron Glickenhaus, which currently makes a twin-turbo 490-horse power vehicle called the SCG003 C, which is designed for Le Man style racing and has a top speed of 183 mph (295 km/h). But now, the carmaker says it will begin producing a modern version of the Baja Boot, which was originally built for actor Steve McQueen to drive in the Baja 1000. This updated version will reportedly be outfitted to take on all kinds of different terrain, and will come in both two-door and four-door models, selling for $250,000 and $270,000 respectively when they go on sale next year.

That alone would be a unique story, but that isn’t the end of what SCG has in mind. The company says that it will prove the off-road capabilities of the vehicle by first competing with it in the Baja 1000, just like the oringal model. After that however, it aims to set a new altitude driving record with the Boot. That will entail driving higher than 21,942 feet (6687 meters), which is the current record set by Gonzalo Bravo and Eduardo Canales in a Suzuki Samurai on Chile’s Ojos Del Salado volcano. SCG says that it will take its boot all the way to the summit of that volcano located at 22,615 feet (6893 meters).

But that still isn’t the end of the story. In 2020, SCG intends to sponsor an expedition that will send the its new Boot on a round the world excursion that begins in New York and ends in Paris. The vehicle will first drive west across the U.S., then north to Alaska, where it will attempt to cross the Bering Sea at its narrowest point. The Boot will allegedly deploy inflatable pontoons that will allow it to navigate the difficult waters of the sea, crossing a section that is just 51 miles wide. This isn’t the first time this has been done, but when British adventurer Steve Burgess did it back in 2008 with his Land Rover it took him days to complete the crossing due to poor weather conditions.

After making landfall in Russia, SCG says its Boot will continue on across that country and into Europe, before eventually arriving Paris, the finish line for this ambitious – some would say crazy – expedition. But, the company hopes to not be alone on this venture as it is inviting other SUV makers to come along for the ride too.

For now, the new Baja Boot can only be seen in artist renders, but SCG says that it has acquired partnerships with OEMs to begin production soon. Whether or not the off-road vehicle ever sees the light of day remains to be seen, let alone makes any of the bold claims it has set for itself.

Thanks to Gear Junkie for this awesome story.