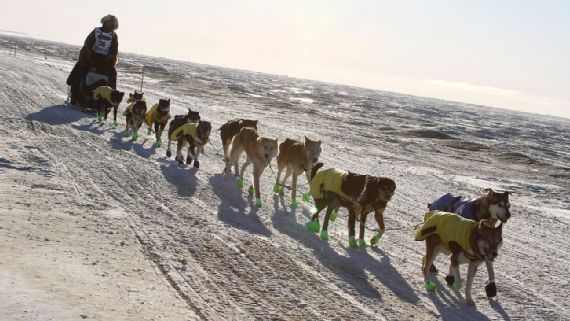 We have a winner in the 2018 Iditarod sled dog race. In the overnight hours, Norwegian Joar Leifseth Ulsom sped into Nome, claiming victory in the race. It is the first win for Ulsom, who first raced in the Iditarod back in 2013 when he was named rookie of the year. He has never finished lower than 7th place, and claimed 4th last year.

The win breaks the stranglehold that the Seavey family has had on the race over the past six years. During that span, Mitch Seavey has won twice, while his son Dallas has gone home with four wins. Currently, Mitch is running in third place out of White Mountain, the second to last checkpoint before reaching Nome. Nicolas Petit is in third, out of Safety and making his way to the finish line.

Ulsom takes home a prize of $50,000, which is a decent sum for a little more than a week’s work. But, that’s down from the $71,000 that Mitch Seavey took home last year. That is in part because of the pullout of key sponsors like Wells Fargo, which have left the future of the race somewhat in doubt.

While the Norwegian was claiming victory in Alaska, Dallas Seavey is currently leading the Finnmarksløpet, the longest dog sled race in Europe. That event is held in Norway, and covers approximately 1200 km (745 miles). They younger Seavey elected to participate in that race as a protest to a doping scandal from last fall that left some in doubt about how he handles his dogs. It would be fitting however if Ulsom won in Alaska, while Seavey took the victory in Norway, setting up an epic showdown next year.

The Iditarod finished up faster than even I expected. I thought it would take the better part of today before anyone would reach Nome, but Ulsom pushed on through the night and his dogs moved with swiftness over the final miles of the race. We should see several more racers reach the finish line today as well, although others will be straggling in well into the weekend and beyond.

Congratulations to Joar on a fantastic and decisive win.