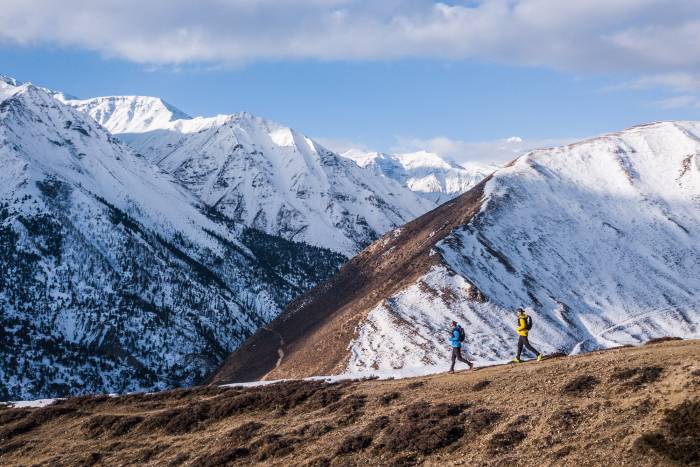 Ultrarunners Ryan Sandes and Ryno Griesel are up to their old tricks again. A few years back we followed along as they went for a speed record in the Drakensberg Mountains of South Africa, and now they’ve set their sights on an even more difficult challenge. The duo have embarked on an attempt to set the “fastest known time” on the Great Himalaya Trail in Nepal.

As of now, Sandes and Griesel are 12 days into their attempt not he record, which currently stands at 28 days. That’s how long they have to complete the 870-mile (1400 km) route which winds its way through some of the more remote villages and mountain regions in Nepal. The record is currently held by Andrew Porter who officially finished in 28 days, 13 hours, and 56 minutes, shaving more than 20 days off the previous record.

Gear Junkie had a chance to catch up with Sandes and Griesel last week and learned a bit about the equipment they’re using for the run. For instance, they’re wearing Salomon 20L backpacks to carry all of their gear, which includes energy bars and supplements, as well as gear that is specific to the leg of the run that they are on. A 20-liter pack isn’t much, but the duo can get by without too much food and water because they are resupplying in the villages that they pass through along the way. They’re also staying in tea huts at night as they follow a west-to-east path along the GHT.

The Great Himalaya Trail is less an official route and more of a loose collection of shorter trails have been linked together. As you can imagine, the trail itself remains fairly rugged, although some sections are more developed than others. It also features plenty of altitude gain, as at this point of the race Sandes and Griesel have already climbed more than 35,275 meters (115,731 ft) with more than halfway yet to go.

The entire run is being documented for a potential upcoming film. You can follow the duo’s progress online by clicking here. The site contains all kinds of info about their route, current position, and much more.