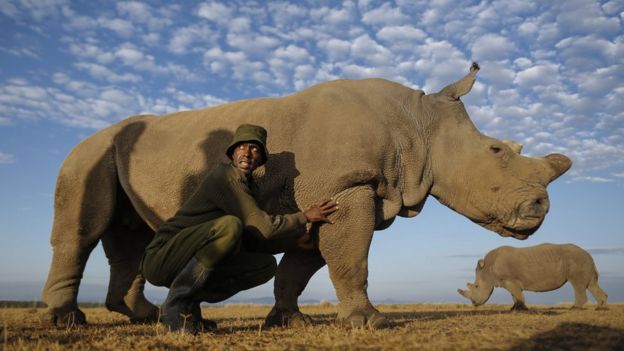 Sad news for conservationists today as it was revealed that the last remaining male northern white rhino has died. This leaves just two females left on the entire planet, making efforts to save the species of all-out extinction even more challenging.

The 45-year old male rhino was named “Sudan” and had been living in the Ol Pejeta Conservancy in Kenya where he was watched day and night to ensure his safety from poachers. But in recent weeks Sudan had seen his health begin to decline, with age-related complications making it harder to treat his ailments. On Monday, the team that watched over him made the painful decision to put him to sleep. In the final 24 hours of his life he reportedly was unable to stand as degenerative conditions in his muscles and bones took over.

The northern white rhino is a casualty of mass poaching efforts that took place in the 1970’s and 80’s, but still continue to this day. The creatures’ horns are valued on the black market in Asia, where they are integrated into traditional medicines, despite the fact that there is no scientific evidence to support the idea that they have any medicinal values whatsoever. This ongoing practice has brought the five species of rhino known to exist in Africa to the brink of extinction, as efforts are made to try to revive the creatures.

With the death of Sudan, only two female northern white rhinos remain. Scientists will now continue their efforts to revive the species by developing in vitro fertilization techniques. This has had limited success in the past and since the gestation period of a rhino is about 450 days, there is a very long time between births. Still, researchers remain hopeful that they can potentially revive this subspecies in the future.

It is a shame what man has done to this creatures all in the name of some hokey belief that their horns promote virility and long life. Rhino horns still bring a considerable amount of money on the black market in Asia, even as efforts are made to educate people on this subject. Poachers are constantly on the lookout for the animals in Africa and will go to great lengths to harvest their horns, leaving the animals to bleed to death in the wild. It is a sad fact of life in certain parts of the world, with places like Uganda, Central African Republic, Sudan and Chad all having their rhino populations pretty much completely wiped out. Hopefully we can turn this around moving forward, but the northern white rhino in particular has very little hope of survival.