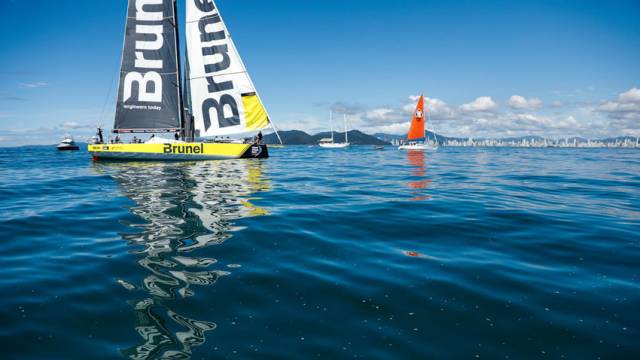 We have an update from the Volvo Ocean Race today, where Team Brunel has become the first ship to arrive in Itajaí, Brazil following a brutal stage that took its toll on the entire fleet. This leg of the race is barley over and it is already being hailed as one of the hardest stages in the history of the race, leaving several ships damaged and the crews emotionally battered with the loss of one of their own.

Team Brunel arrived in Brazil yesterday, having covered some 7000+ nautical miles while en route from Aukland, New Zealand. The route took the ships into the treacherous Southern Ocean where every vessel spent its fair share of time below the “Furious Fifties,” which refers to the rough waters found below 50ºS latitude. There, the teams faced strong winds – often in excess of 40 knots – big waves, and rolling storms. In fact, the winds were so rough at times that Team MAPFRE was forced to stop to make repairs on a mast track, while Team Vestas/11th Hour was demasted altogether off the Falklands.

Of course, the biggest story of this stage was the loss of sailor John Fisher of Team Sun Hung Kai/Scallywag, who went missing more than a week back. Fisher was at the helm of the ship and moved forward to make an adjustment to the sails when he was struck by the mast and knocked into the ocean. Despite the fact that he was wearing emergency rescue equipment, and the team immediately turned around to be begin a search, they could find no sign of him. After hours searching the team was forced to move on as weather conditions took a turn for the worst. A shadow has hung over the race ever since with all of the teams taking his death hard.

It wasn’t an easy stage to win for Burnel, as Team Dongfeng was close behind over the final couple of days. At one point, no more than a mile separated the two ships, with a cat and mouse game being played out in the Atlantic Ocean. The second place finish for Dongfeng may be enough to move them into first place overall for the race, as rival MAPFRE has struggled throughout the stage and isn’t likely to wander into port until later this week.

This has been one dramatic stage to follow, and even if you’re not a fan of sailing, the Volvo Ocean Race is living up to its billing as one of the most grueling endurance events in the world. The next stage will send teams from Brazil to the U.S., and isn’t likely to be quite so dramatic. But, there are still several months to go before they reach the finish line and the North Atlantic could easily sprinkle a bit more drama into the picture before it’s said and done.