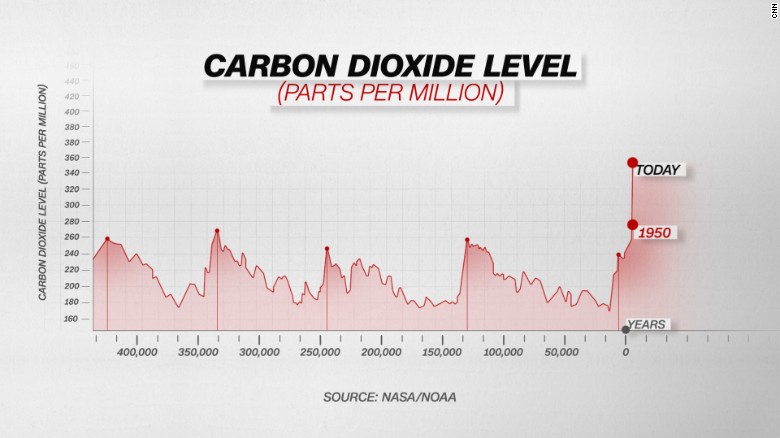 As if there weren’t already plenty of warnings about the Earth’s shifting climate, we got another one earlier this week when it was revealed that revealed that carbon dioxide (CO2) levels in the Earth’s atmosphere passed record levels this past month. According to a new report from the Scripps Institution of Oceanography, the average amount of CO2 in the atmosphere reached 410 parts per million, the highest it has ever been in recorded history.

The measurements for the test – which is called the Keeling Curve – was taken at the Mauna Loa Observatory in Hawaii. According to the report, there has been a 30% increase in CO2 levels measured in the global atmosphere since the Keeling Cruve first began back in 1958. That 60 year period is the longest that researchers have kept accurate measurements of the increase of so-called greenhouse gasses on the planet.

The most alarming aspect of this report is that carbon dioxide is the most worrisome of all of the greenhouse gases because it plays a direct role in creating global warming. CO2 is responsible for trapping heat in the atmosphere, reading to a noticeable rise in temperature and threatening ice caps and glaciers in a variety of locations.

Scientists have used ice cores collected from the Poles and glaciers from around the world to study the impact of man on our atmosphere. Those cores indicate that rise in CO2 levels started prior to 1950 and seems to correlate directly with the onset of the Industrial Revolution, when factories began pumping more carbon dioxide into the atmosphere. Prior to that the CO2 levels fluctuated naturally for thousands of years, going up and down from time to time. According to research however, those levels never exceeded 300 parts per million at any point over the past 800,000 years. Again, in April we were at 410 ppm.

Those are some staggering numbers to think about and try to process. CO2 levels are continuing to rise and we may have reached a point of no return in terms of their impact on climate change. If temperatures continue to rise, we are likely to see Polar ice caps melt too, causing the ocean levels to rise as a result. That will impact hundreds of millions of people who live near the oceans worldwide.

I’d like to think that it’s not to late for us to eventually find a way to reverse these trends and have less of an impact on the planet. But these dire reports seem to continue to mount up. Hopefully more and more people will take note and we’ll all start to find ways to turn the corner on this issue.