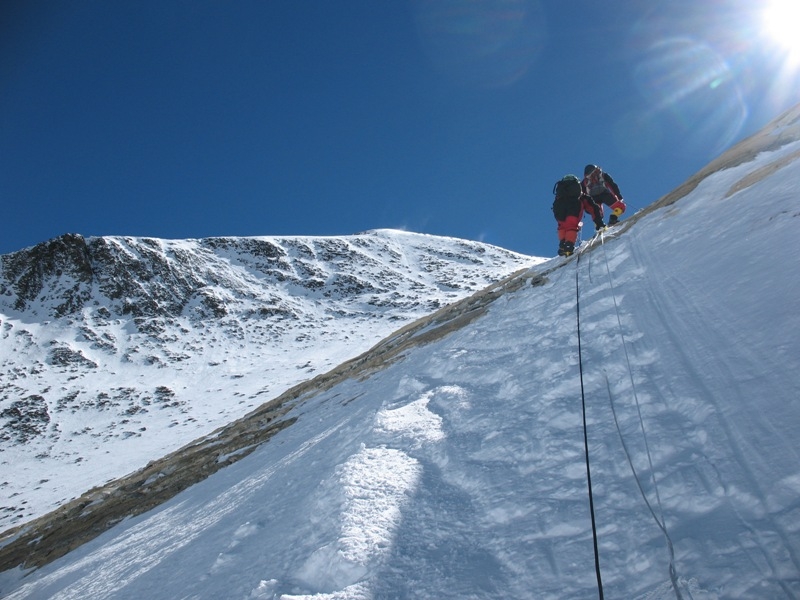 The day we’ve all been waiting for is finally here. The first major wave of summits are upon us on Mt. Everest, where a number of teams have now reached the top. The weather is reportedly very good at the moment, with low winds making it a good day to top out on the world’s highest peak. Even better, the forecast looks good for the next few days, setting the stage for several more good summit days to come.

The South Side of the mountain in Nepal has been a hive of activity with teams either heading to the summit or moving up to the various camps to get into position to do so. The Adventure Consultants have put several members of the team on the summit, including lead guide and owner Guy Cotter. Jagged Globe has also sent its team up, but there is no official word on their success yet. Kaitu Everest Expedition reports 100% success with 8 Sherpas and 6 clients standing on top. Meanwhile, the IMG team is now heading up the mountain to take advantage of the weather windows.

On the North Side of Everest in Tibet things are also moving quickly, although with significantly fewer climbers it isn’t quite so hectic from that direction. Furtenback Adventures is reporting 100% summit success today too with all clients and Sherpas reaching the top around 5:00 AM local time. It seems that a number of the other North-Side teams are lining up behind them to follow.

Unfortunately, Alpenglow isn’t one of them. The team was on the move this morning and looked like they were about to summit when they started to have a rash of failures on their oxygen regulators. The equipment apparently quit working when the team was at 8500 meters (27,887 ft). In fact, Adrian Ballinger tells Alan Arnette that 10 of the team’s 39 regulators inexplicably malfunctioned, forcing everyone to turn around and head back to C3. On the descent, another four regulators stopped working as well. Apparently the initial set of breakdowns all occurred within four minutes of one another, while the second set all happened between 8300 and 7700 meters (27,230-25,262 ft.) on the descent.

Obviously a malfunction rate of this kind is pretty alarming and Ballinger hasn’t seen anything like it in the years he’s been guiding. He and the Sherpas gave up their regulators to the clients to ensure that they got down safely and they are now back in Camp 2 recovering. We’ll have to wait to see if they can get another set of masks and then make an attempt on the summit again. Everyone is safe at lower altitude now, but the Alpenglow blog says other teams have experiencing similar issues.

In other news, this round of summits has brought some new records to Everest in terms of the number of times individuals have reached the top of the mountain. 48-year old Kami Rita Sherpa now stands alone with the most summits of Everest ever. He topped out today to claim his 22nd successful climb of the mountain. Similarly, Lhakpa Sherpa led a group of clients to the highest point on the planet, garnering her ninth successful summit as well. Finally, Kenton Cool went to the top for the 13th time, extended his record for the most ever summits by a Brit.

Over on Lhotse, Japanese climber Matsumoto Tatsuo topped out today too, setting a new age record for that mountain. Tatsuo is 79 years old and reached the summit at about noon local time. He has successful climbs of Everest and Manaslu on his resume too.

Finally, sad news from Everest today as we have also received word that a Sherpa has gone missing somewhere above Camp 4. Lama Babu Sherpa was nearing the South Summit at 8000 meters (26,246 ft) when he was last in contact with his team. Nothing has been heard from him since, but there is hope that it is due to equipment failure on his radio. Other climbers are keeping an eye out for him as they go up today and tomorrow.

More news to come soon. The summit season is just getting rolling.