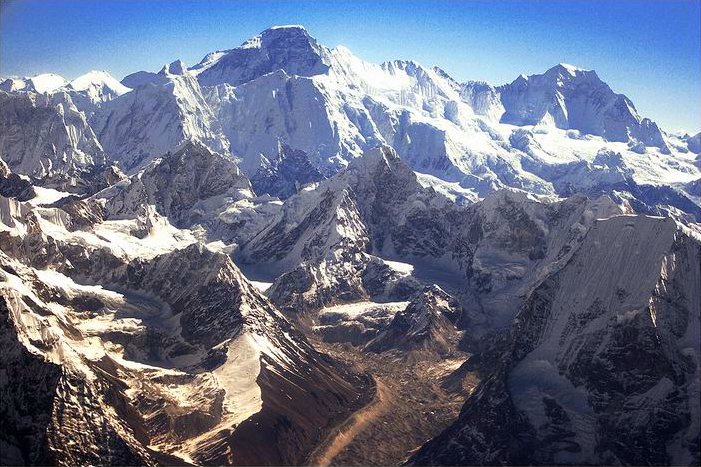 What a difference a few days makes. Last Friday when we posted an update on the current climbing scene in the Himalaya there wasn’t much to say, as most of the teams were finishing up their acclimatization rotations and getting ready to settle in for the wait for a weather window. Just a few days later there is a lot to report, including news of successful summits, a potentially missing climber, and two alpinists who currently find themselves in hot water with the Nepali government following an allegedly illegal ski descent on Everest.

We’ll start with the good news. While most teams are wrapping up their preparation for a final push to the summit of their respective mountains, one team completed the first leg of their ambitious climb. Adrian Ballinger has taken a group of his Alpenglow clients to the top of Cho Oyu, topping out yesterday in extremely cold temperatures and windy conditions on the summit. But, the weather was better than they had expected, as high winds were predicted for the entire climb but were actually only an issue as they neared the very top. As a result, they made a easy for the summit, took a few photos, and turned back down fairly quickly.

Now, the team will depart Cho Oyu and head over to the North Side of Everest for a chance to nab a second summit of the season. What is more remarkable is that the climbers only just arrived in Tibet a little more than a week ago, but did pre-acclimtize at home using oxygen tents. Alpenglow has been at the forefront of this technique and it seems to be paying good dividends for them in terms of success and client satisfaction.

Meanwhile, today we’ve also received word of a climber who had potentially gone missing on Shishapangma. Stefan Nestler is reporting that Bulgarian climber Boyan Petrov hasn’t been seen for several days after he set off on April 29 for a solo summit of that mountain. On May 3, teammates were able to spot him using a telescope in BC as he approached Camp 3. This past weekend, another team of climbers went up to C3 and found Petrov’s tent partially open and his sleeping bag still inside covered in snow. What has become of him is unknown.

Shisha would be Petrov’s 11th 8000-meter peak and he was climbing with out the use of bottled oxygen. He had hoped to use the mountain as an acclimatization climb prior to making an attempt on Everest later this spring. Hopefully he is safe on the mountain somewhere, but a search and rescue attempt is scheduled to get underway today.

Finally, Matt Moniz and Willie Benegas have found themselves in a spot of trouble with Nepali authorities. As reported last week, the duo make an acclimatization rotation up to Camp 3 on Everest prior to their attempt to summit that mountain and Lhotse later this spring. On their descent back to C2 the two men skied down the Lhotse Face, sharing their accomplishment on social media. As it turns out, they didn’t have a permit to ski the mountain and are now under investigation by officials. According to The Himalayan Times, they could face fines and a ban on entering Nepal for five years, or a ban on climbing in Nepal for up to ten years. The permit carries a price of $1000 and a $500 trash deposit is required as well.

Hopefully this will all get sorted out quickly and the two men will avoid any real problems. But, the Nepali government takes these issues very seriously and considering the rules and regulations they’ve been putting in place in recent years, it is possible they’ll make an example out of these Matt and Willie and institute a ban. We’ll just have to wait to see how this gets resolved.