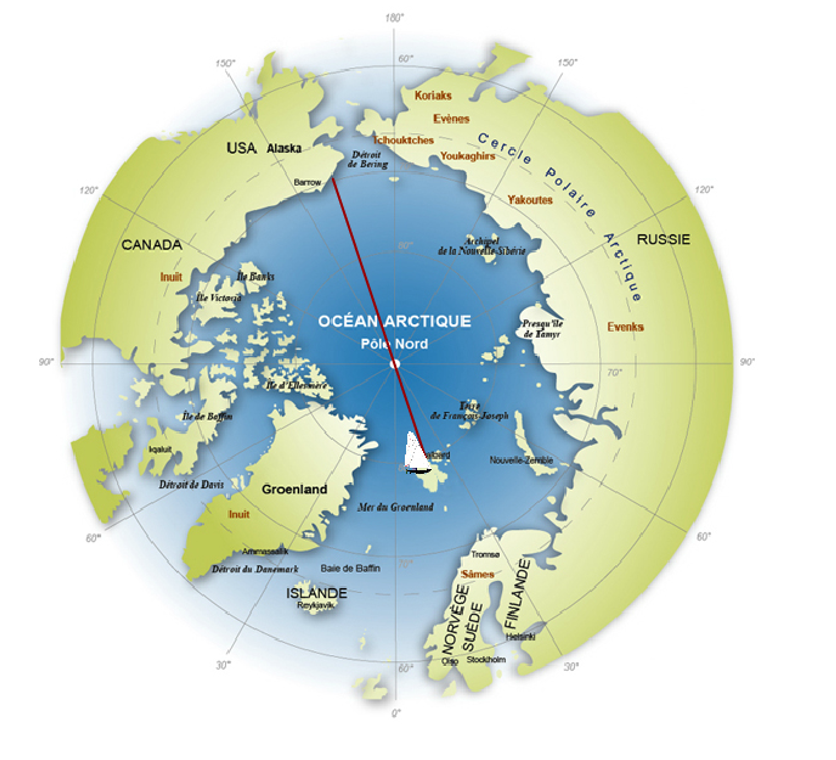 Three explorers have set off on a difficult, but potentially groundbreaking, expedition that has them attempting to sail across the Arctic Ocean at the height of summer. The team left Alaska a few weeks back and if successful they hope to cover more than 3000 km (1864 miles) en route to Spitsbergen in Norway.

Dubbed the Quest Through the Poles expedition, the team is made up of veteran explorers Vincent Colliard, Sébastien Roubinet and Eric André, each of whom has plenty of experience wandering the remote places of our planet. For instance, Colliard has embarked on an ambitious project with polar legend Borge Ousland that will see the two men ski across the 20 largest ice caps in the world. Roubinet has spent plenty of time out on the water in the Arctic Ocean, having sailed the Northwest Passage and attempted this particular journey on two previous occasions. Meanwhile, André has explored large sections of the world by bike and was part of the Northwest Passage journey too.

The expedition has several goals, not the least of which is to demonstrate that the Arctic Ocean is almost completely navigable during the summer these days, thanks to climate change and global warming. It also remains the only ocean that hasn’t been crossed in a sailboat, and the team hopes to do that, passing by the North Pole while on their way to their final destination. Along the way, they plan to collect samples of the ice for analysis of the impact of changing atmospheric conditions.

The three men are traveling aboard a custom made catamaran that was built to survive in the Arctic. The hull of the ship is built from innegra and basalt, which is said to make it strong enough to take on the cold, ice-choked waters that are found at the top of the world. Roubinet also reportedly created a new method for generating power while traveling too, which in theory should keep their communications systems and other devices working throughout the journey. The vessel is also light enough that it can be dragged across the ice if need be as well.

According to ExWeb, Roubinet first attempted this journey back in 2011 but he and his partner Vincent Berther turned back when their onboard power system failed. He and Colliard than tried again in 2013, but their ship got stuck in the ice at 82ºN and they had to be rescued by a Russian icebreaker. They’re hoping that now they’ll be able to complete the full journey in what is sure to be a bittersweet success story. They’ll go into the record books as the first men to sail across the Arctic Ocean, but in doing so they’ll demonstrate just how much damage climate change has actually done.

You can find out more and get updates to the Quest Through the Poles expedition on the team’s official website.