If you follow the regular patterns of the adventure seasons, you probably already know that climbing in the Himalaya this fall is nearing an end, while the Antarctic ski season will soon be ramping up. In a matter of just a few weeks time, the first South Pole skiers will hit the ice, starting their own personal journeys across the frozen continent. As usual, we’ll be keeping an eye on some of the biggest and most interesting of those expeditions, bringing updates on the progress of these explorers. 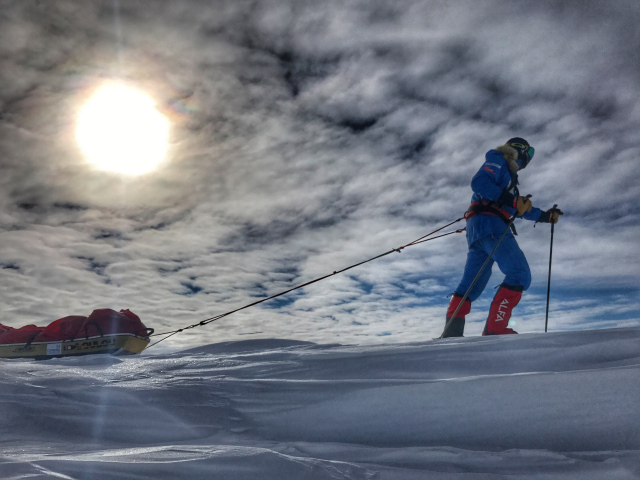 A company called Antarctic Logistics and Expeditions handles most of the support and transportation for those looking to make a trip to the bottom of the world. They make regular flights out of Punta Arenas, Chile and maintain a semi-permanent camp on the ice at a place called Union Glacier. According to the company’s internal schedule, the first flight to Union Glacier will take place on November 1, carrying only ALE staff and supplies. That will give the team an opportunity to get a start on preparing the camp for the arrival of the skiers, climbers, and explorers, which will happen with the first regular flight on November 10. From there, the Antarctic ski season will officially be on, with plenty of action to follow closely.

Some adventurous travelers embark on what is known as a “last degree” ski journey to the South Pole. This individuals are typically flown out to a starting point at 89ºS and then ski the final segment to reach the Pole at 90ºS. This usually takes about 10-12 days to complete, and while a good challenge, we don’t tend to follow those guided ventures quite so much. Instead, we keep an eye on the explorers who have bigger, more ambitious goals, such as skiing from the coast at Hercules Inlet all the way to the South Pole, covering more than 700 miles (1126 km) in the process. Many of these skiers go it alone, traveling completely solo and unsupported in one of the harshest environments on the planet.

As the new 2018-2019 season looms, we’ve been compiling the list of expeditions that we’ll be watching closely this year. Our friends over at Explorers Web have conveniently done the same, giving us a glimpse of which teams they’ve deemed worthy of keeping an eye on. For instance, British polar explorer Lou Rudd will embark on what is perhaps the most ambitious expedition of all, skiing all the way to the Pole and back to the coast again, completely solo and unsupported. No one has ever accomplished that feat before, and Rudd’s good friend Henry Worsley died in 2016 trying to complete this same expedition and route. To survive in the Antarctic alone, Lou will drag a sled behind him that weighs 150 kg (330 pounds), but still estimates he can finish the trip in as little as 75 days. According to his website, Rudd will embark for Punta Arenas later this week.

Other interesting expeditions that we’ll be following closely include Barry Gray, a former Royal Marines Commando who will ski from Hercules Inlet to the South Pole to gain valuable experience before making the same attempt as Rudd in 2019. Extreme athletes Jenny Davis and Matthieu Tordeur are also attempting solo ski expeditions to the Pole, as is Laval St. Germain, who ExWeb points out is trying to complete the Explorer’s Grand Slam by climbing the highest mountain in Antarctica –– Mt. Vinson –– while he’s in the neighborhood too. Before he does that however, he’ll first ski 1300 km (807 miles) to the South Pole.

There will be other skiers to follow for sure and we’ll be keeping a close eye on many of them. But this is a good round-up of some of the top athletes and explorers who will be out on the ice in just a few weeks time. It should be an interesting season as always.