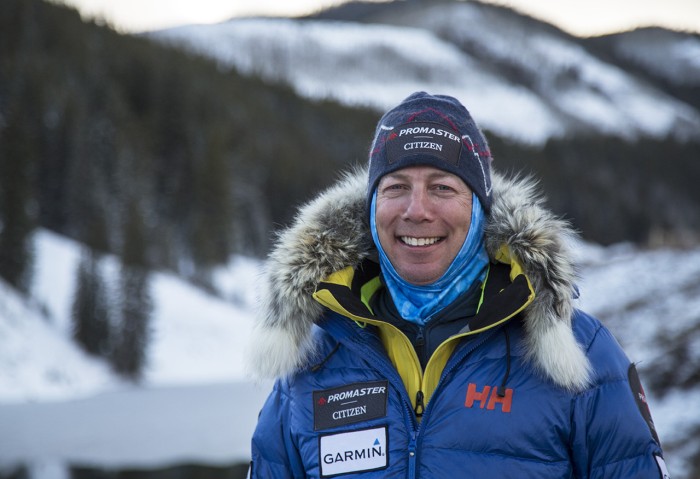 While I was away at Outdoor Retailer last week, another polar explorer has announced his plans for the 2018-2019 expedition season in Antarctica. American Eric Larsen will set out for Punta Arenas, Chile this week with the intention of once again skiing to the South Pole. But this time, he’s got his eyes on setting a new speed record for covering that route while also raising awareness of climate change at the same time.

Larsen expects to leave for South America on Friday in preparation for his journey, which will cover roughly 700 miles (1126 km) starting at Hercules Inlet and ending at the South Pole. For Eric, that journey is a familiar one, as he has skied that route in the past, along with a full-distance expedition to the North Pole and climbing Everest within one year. He also guides in both the Arctic and Antarctic, leading “last degree” ski expeditions to the North and South Pole. What’s different this time, is that he is hoping to complete the entire route in under 24 days, setting a new speed record in the process.

Back in 2011, a Norwegian South Pole skier named Christian Eide set down an impressive mark when skiing across the Antarctic. He covered the same route that Larsen is attempting in just 24 days time, an astounding record to say the least. The American thinks he can do it in 22 days or less however and plans to ski for 12-16 hours a day to ensure that he hits his required quota of miles. In order to do that, he’ll need to cover approximately 32 miles (51.4 km) each and every day, which is about double what most of the skiers will do. To achieve that kind of speed, he’ll drag a sled weighing about 135 pounds (61 kg) which will carry all of his supplies and gear. That is considerably lighter than most Antarctic skiers, which should help him to go faster than most others too.

One of the key components of the Last South expedition is to raise awareness of how climate change is impacting the polar regions of the planet. When Larsen skied to the North Pole back in 2014 it was an incredibly difficult challenge due to the breaking up of the Arctic ice. Now, nearly five years later, that expedition has become nearly impossible, and no one has been able to finish it since.

“Unfortunately, my expeditions are no longer about being first, but rather being last, and I truly believe that time is running out for these types of adventures,” Larsen said in a press release announcing his journey. The statement is an indication of how much he believes that global warming will change the environment to the point that these types of adventures may not be possible in the future.

We’ll be following Eric’s expedition very closely in the days ahead as it will certainly be interesting to see if he can set the new speed record. Personally, I never thought anyone could challenge Eide’s mark, but if anyone can, it will be Larsen. Stay tuned for updates.