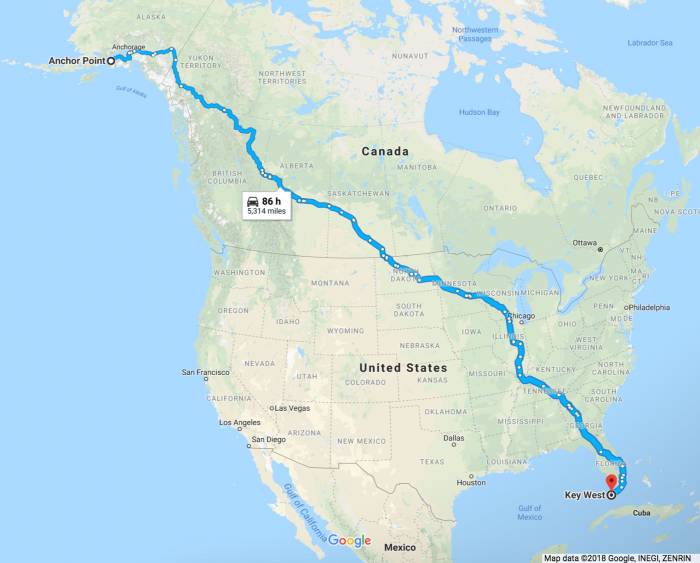 A few weeks back I shared the story of Pete Kostelnick, an ultrarunner who was in the midst of an epic journey from Alaska to Florida on foot. At the time, Kostelnick had just entered the state of Georgia and was continuing to make his way south towards his eventual finish line in Key West. On November 5, he crossed that finish line, bringing an end to one of the most impressive human-powered journeys we’ve seen in some time.
Kostelnick started his trans-continental run on July 31 in Anchor Point, Alaska with the intention of running all the way to Key West in 100 days. He ended up cover the distance between those two points in 98 days instead, running a total of 5384 miles (8664 km) in total. That means he covered roughly 55 miles (88 km) each and every day of the trip.
The ultrarunner’s route took him out of Alaska, across Canada, and back into the U.S. in the state of North Dakota. From there, he went through Minnesota, Wisconsin, Illinois, Kentucky, Tennessee, and Georgia, before entering into Florida where he eventually ran to the Atlantic Ocean at the southernmost tip of the continental United States. There, he delivered a small vial of water from the Pacific that he had carried all the way from Alaska.To get a better perspective of what Pete accomplished, check out the short video below. It was created with the help of his sponsor Hoka One One, as Kostelnick ran in the company’s Clifton 5 and Bondi 6 shoes the entire way.

Major congratulations to Pete on a job well done. This was an impressive feat to say the least.

3 thoughts on “Ultrarunner Completes Alaska to Florida Journey on Foot”