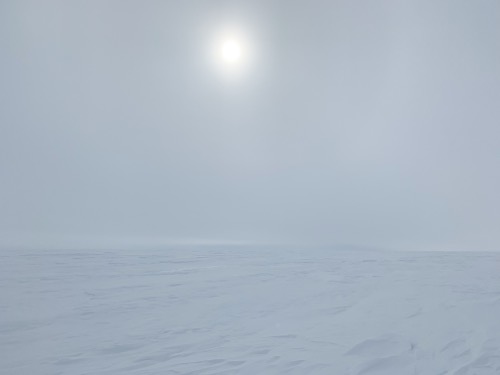 Two of the Antarctic skiers reached major milestones yesterday on their way to the South Pole, while others continue to experience poor conditions and whiteouts in their struggles to make significant progress. In other words, it is business as usual at the bottom of the world, where things are never easy, even when the weather is cooperating.

Colin O’Brady and Lou Rudd, both of whom are on solo missions to become the first person to make an unsupported traverse of Antarctica, are smiling today. That’s because the two men have now reached the top of the polar plateau, having now climbed some 9300 feet (2834 meters) from their start at sea level. This is important because the rest of their journey should now be relatively flat all the way to the South Pole. After reaching that landmark, they’ll continue skiing to the far Antarctic coast, but that will be downhill, allowing them to make significant progress at a fast rate.

O’Brady is already approaching the 88th degree, while Rudd will get there in the next day or two as well. That means they have just two degrees of latitude to cover before reaching the Pole and at their current pace they should arrive at that point before Christmas. It won’t be completely easy from here on out however as they are both approaching another major sastrugi field, which could slow progress once again and make for rough going. Considering they’ve been dealing with sastrugi almost from the start however, chances are they’ll be well prepared.

Meanwhile, Eric Larsen continues to experience the worst conditions imaginable when you’re trying to set a speed record for skiing to the South Pole. The snow has been deep and soft, which is slowing down his progress and sapping the legs of strength and persistent whiteout conditions have navigating a constant challenge.

Still, he is pressing forward as best he can although he is now more than a little behind his intended schedule. That means he’ll be taking shorter rests and staying in his tent for less time as he attempts to make up for the slower start. Today was his best day yet, reaching 19.3 nautical miles (22.2 miles/35.7 km), which is a significant distance but still lagging well behind the necessary pace to set a new speed record.

In his latest dispatch, Larsen has also indicated he’s beginning to worry about his supplies. In order to travel light, he didn’t stock his sled with a lot of extra food and fuel, which means that at his slower pace he may not have enough to reach the South Pole. For now, it isn’t a major worry but if things get dicey he may have to call in a resupply, which would also end his “solo/unsupported” status.

Most of the other South Pole skiers are significantly behind O’Brady, Rudd, and Larsen and have been dealing with whiteouts and challenging surface conditions too. We’ll check in with them in our next update to see how they are faring on their way to the South Pole as well.