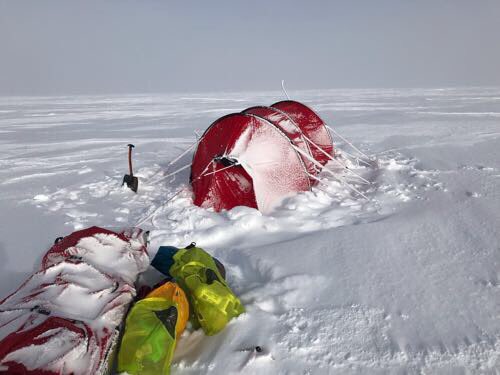 The last time I did an update on the current Antarctic season a few days back it mainly focused on the two attempts to traverse the continent and Eric Larsen’s speed crossing to the South Pole. At the end of that report I promised to share news of how the other South Pole skiers are doing and while there are now quite a few of them out on the ice, they all continue to struggle with the conditions.

When traveling in the Antarctic, the skiers generally expect it to be cold, windy, and harsh, even in the austral summer. But, the continent is also a dry one, so snow tends to be a minimum and while whiteouts do occur, they are somewhat infrequent. That isn’t the case this season however, as the ground is covered in deep, soft snow that makes skiing very slow and difficult. Whiteout conditions have been an almost daily occurrence as well, which makes navigation very hard and tends to sap the spirits too. So far, in the early going of their journeys, that has been what most of the skiers have been encountering.

Antarctic newcomer Masatatsu Abe from Japan has been getting the full experience thus far. His initial plan was to ski just a few hours each day in the early going, and slowly ramp up to full speed once he had become accustomed to the situation and pace. The soft snow has made the extremely hard to do and he now finds himself behind schedule and traveling at a slower pace than he expected. Fortunately, he seems prepared for this and is taking it all in stride right now. But eventually things will need to improve  and he’ll need to start covering much longer distances. Abe trains by pulling a rickshaw, so he is use to the hard work that comes with manhauling, but so far he hasn’t been covering a significant amount of miles each day.

Matthieu Tordeur hasn’t found the Antarctic to be much more welcoming, but he is making a bit steadier progress on his way to the South Pole. He recently crossed the 81st parallel and celebrated his 27th birthday on the same day, and is increasing his pace nicely. Currently he’s hitting around 15 km (9.3 miles) per day, which isn’t a blistering pace by any means, but is good solid work considering the conditions and the fact that it is still early in the expedition.

Canadian Laval St. Germain has been dealing with the challenging surface conditions as well, and his pace reflects that. He intends to make a solo ski to the South Pole then climb Mt. Vinson afterwards, but so far his pace has been slower than expected. According to his Garmin expedition tracker yesterday he covered just 2.03 miles (3.2 km) as whiteouts, sastrugi, and soft snow continue to take their toll.

British ultrarunner Jenny Davis in the Antarctic and is set to travel to Mt. Vinson to climb that peak before she begins her solo journey to the South Pole. Davis will acclimatize to the altitude and allow her body to become accustomed to the cold on the highest peak on the continent ahead of the ski expedition. She’s hoping to have a go at the speed record as well.

Finally, the Clean2Antarctica team of Edwin and Liesbeth ter Velde are about to embark on their journey to the South Pole but it will be a much different experience than those of the skiers. The husband and wife team will be driving a solar powered vehicle across the frozen continent in an effort to demonstrate how clean energy is good for the environment. They’ll set off soon in their little buggy and while it will certainly be a different experience compared to what those traveling on foot are enduring, there will be plenty of challenges for them to navigate too. We’ll keep an eye on their progress.